SLO Repertory Theatre's stage at 888 Morro St. may be dark, but the repertory company's mission statement of "producing professional theater, nurturing artists, and providing theater education for children and adults" carries on. SLO Rep raised the curtain on its new online series, The Intermission Show, which is now available on YouTube with new episodes starting at 3 p.m. every Monday, Wednesday, and Friday until the theater reopens.

The brisk 8- to 10-minute show is set up like a socially distanced talk show with SLO Rep's Managing Artistic Director Kevin Harris at the helm, clad in a tacky suit and tie with a faux alcoholic drink nearby. By the time you read this, they will be eight episodes into the series. 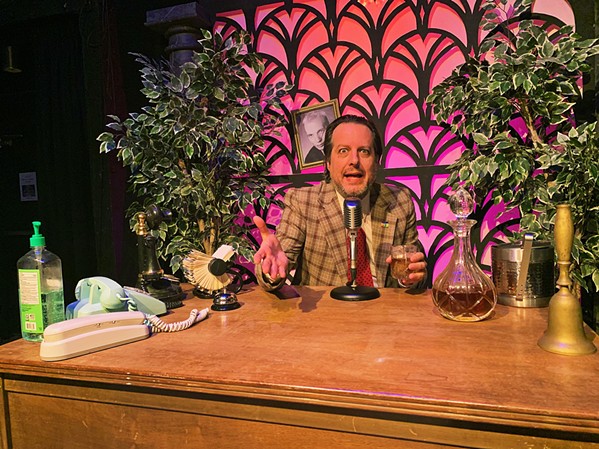 "My comedic idol was Garry Shandling, so, there's certainly a bit of Larry Sanders fueling the whole thing," Harris explained. "What was great about that character is that he was always on the brink of a complete nervous breakdown, and that neurosis led to the comedy leaning toward self-deprecation and a constant acknowledgement of the artifice of the medium. The approach seemed correct, given that The Intermission Show wouldn't exist without the completely unprecedented COVID-19 crisis that we're all trying our best to navigate on a day-to-day basis.

"We're all struggling emotionally and professionally, so it was vital that we acknowledge that struggle in the show," Harris continued. "This situation really sucks, and it's therapeutic—for us, at least—to admit that somehow during each show."

Clever editing sells Harris' trepidation as he introduces segments such as "Sheltering at Home," where SLO Rep-associated actors broadcast from their homes. My two favorites from the six episodes I saw were Alicia Veium, who was stuck at home with her two kids, from whom she was hiding as she clandestinely recorded her bit; and Cameron Parker, who appears with his little dog and brags about his gift for improvisation while floundering to prove his claim true. It's all very funny.

There's also a segment called ACT (Academy of Creative Theatre) Spotlight, which on Mondays challenges the show's youthful audience members—and yes, it's absolutely kid-friendly even with Harris' faux drink—to doing something creative, record it, and send it in by Thursday at 3 p.m. to appear on the coming Friday's show. I watched five terrific monologue performances by local kids London Raftery, Logan Raftery, Addisyn Tejado, Caleb Temple, and Charlie Beck. The next challenge asked kids to make their own costumes.

"At the beginning of the crisis, we were forced to cancel our entire spring session of classes and spring break camps," Harris noted. "Now, it looks as if the summer session is also going to be canceled. Our ACT program is one of the pillars of the organization, and we knew that we wanted to provide educational opportunities for our students (and all young artists) throughout this shelter-at-home period. So far, the response has been overwhelming. I'm right in the middle of editing our new submissions for the costume design assignment. It's great to retain some sort of connection with our students during this time, and we look forward to finding new ways to collaborate with them every week while we're shuttered."

The whole series feels very timely. Many of the "Sheltering at Home" reports are hilarious and really seem to try to capture the frustrations many of us are feeling.

"Before we created the first episode, we sent out a list of questions to over 300 artists around the country; each artist can pick and choose what questions they would like to answer, or they can submit something completely unsolicited," Harris explained. "What was important to us from the very beginning was that we were not going to try to replicate the experience of live theater. It's extremely difficult for live theater to translate to video, and we knew that we had to go in a different direction and try—for better or for worse—to create something completely new and original from SLO Rep. The artists who have submitted instinctually understood that, and I believe that that's what's fueling the tone of their submissions. It gives them the opportunity to create something personal about their own COVID-19 experience."

In the more recent episodes, Harris started including "What's Happening on the Internet" bits that are hilarious.

"My kids are 16 and 15, so I've spent the last decade in the YouTube wormhole myself," Harris admitted. "The segments began as a way to demonstrate, in the simplest way, that regardless of what's happening with the crisis, the online world is continuing to do what it does best: creating memes that are collectively determined to be worthwhile by the masses. For me, the segments are a nice little breather from the difficult reality of the real world. However, after each of those segments, we use another popular meme—'Sounds of Silence' played during a close-up of a worried face—to acknowledge the respite they provide is fleeting in the face of our current reality."

The show's terrific—fun and heartfelt, and it feels like a true attempt to create community at a time when face-to-face interaction is restricted.

"Theater is all about bringing people together, in one room, breathing the same air, experiencing a story that, hopefully, will help illuminate our shared humanity," Harris said. "Right now, we're unable to do this in the traditional way. Our hope is that The Intermission Show can be a place for our patrons, students, colleagues, and friends to meet up a few times a week to check in on each other so that when our doors are finally reopened, we can celebrate exactly what it means to be community.

"We miss our friends and SLO Rep family," he continued, "and this is our way of continuing to create art, if only to check in and say hello." Δ

Senior Staff Writer Glen Starkey's show must go on. Throw roses to him at gstarkey@newtimesslo.com.