Macbeth will play at the SLO Repertory Theatre from Jan. 10 to 19, with showtimes on Wednesday through Saturday at 7 p.m., plus Saturday and Sunday at 2 p.m.

It's not every day that you get the chance to see a Shakespeare production acted out onstage. Today's theater companies often pass up Shakespeare's work in favor of more contemporary plays, local actress and Pacific Conservatory of the Performing Arts alumna Rachel Tietz told New Times.

But for its first production of the 2020 season, SLO Repertory Theatre is giving the stage to youth actors from the Academy of Creative Theatre (ACT) for a production of Macbeth, directed by Tietz. Though ACT is using an edited version of the play specifically written for students in grades four through 12, many of the most famous lines and scenes remain intact. And while every member of the student cast is under the age of 18, the level of professionalism in their performances swiftly transports the audience into Shakespeare's world.

"The young actors rose to the occasion and to the challenge more than adults might have," Tietz said.

Because adult actors might have more knowledge and preconceived notions about Shakespeare, they "can have reservations," Tietz explained. But for younger actors, the lack of exposure to Shakespeare can actually work to their advantage.

"Being so inexperienced with Shakespeare made them so open to trying everything," Tietz said. "They came with their own ideas. They knew their parts. They did the research behind it. They went above and beyond with everything."

Tietz's comments on her cast bear out in their performances. From the first scene to the last, the energy of Shakespeare's bloodiest play is felt through every line. The famous first scene in which the Weird Sisters, the three witches (played by Maggie Zuniga, Liora Nunley, and Sophia Lea), make their cryptic early predictions that guide the rest of the narrative is as chilling as it is thrilling. The actresses' piercing dialogue, twitchy movements across the stage, and synchronized energy depict these famous characters in all their glory.

After Macbeth (Phineas Peters) receives his first round of predictions from the witches—and begins to ideate how they might come true—the audience can see his timeless character begin to fall prey to a lust for power. And Lady Macbeth (Penny DellaPelle) is right there alongside him, not only enabling and encouraging Macbeth's homicidal thoughts, but shaming him when he begins to doubt his own intentions. Upon completing the bloody act, the moments these characters share together onstage perfectly match the intensity that Shakespeare wrote into his iambic pentameter lines 400 years ago. 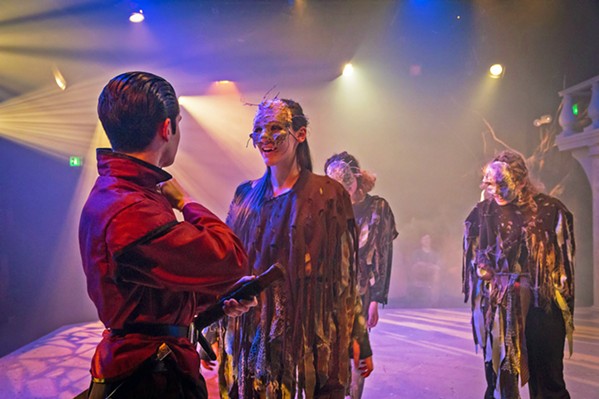 Tietz said that this murderous moment is one of her favorites in the play.

"I think it's probably one of the most famous scenes, when they come out with the blood on their hands after they've murdered Duncan," Tietz said. "Just watching that progress from a rehearsal room into the lights and the sound, and having blood and the knives on stage ... it's thrilling. I just can't get enough of that scene."

Even in moments when the archaic Shakespeare-era English is difficult to understand, the spot-on facial expressions and bodily movements of the cast allow the audience to keep up with ease. If you've never considered yourself much of a Shakespeare fan, this production just might turn you into one.

"My goal is to have people underestimate them and wonder if kids can handle this, and then get their minds changed by the level of work that they do," Tietz said. "It's amazing when you think about how old they are, and all they accomplished." Δ