SLO Rep's production of The Fantasticks shows Wednesday through Saturday at 7 p.m. and Saturday and Sunday at 2 p.m. until Oct. 13. Find tickets and showtimes at slorep.org/shows/the-fantasticks.

To say the opening weekend of SLO Repertory Theatre's The Fantasticks was a success would be an understatement. Every last seat of the Sept. 15 show was filled.

The musical, which was first performed in 1960 in a small Off-Broadway New York City theater, tells the story of two neighboring fathers who pretend to despise each other in an effort to make their children, Luisa and Matt, fall in love. The play is narrated by El Gallo, played by Tony Costa, a bandit hired by the fathers to stage a kidnapping of Luisa so that Matt can "save" her—what they believe is a foolproof way to bring them together. As with any good love story, complications of the plan ensue, but the couple finds their true love in overcoming the twists and turns of their story.

Luisa, played by Taylor Hart in SLO Rep's rendition, is a 16-year-old girl who suddenly realizes that she is "growing pretty." Hart channels a youthful energy onstage that leaves the audience fully convinced that Luisa is indeed in the throes of her teenage years. Luisa, upon realizing that her "ugly duckling features had undergone a change," becomes "almost immediately and incurably insane," tells the narrator.

Between her random shrieks and delusions that "she is a princess, [and] that her name must be in French," Luisa is the classic typecast of a teenage girl. Hart's convincing performance captures that cringeworthy teenage egotism that all 16-year-olds seem to fall victim to. Yet, amid her youthful craze, we also sense Luisa's underlying will to determine her own path when she proclaims, "I want much more than keeping house." Hart beautifully captures both Luisa's adolescence and her mature sense of agency in a way that makes the two seem less at odds than we might initially assume.

Matt, played by Ashur Gharavi, and Luisa live on opposite sides of a wall that their fathers have built to buffer their supposed feud. In reality, Matt and Luisa's dads are good friends who want nothing more than their children to be together. But they know that their children, being young and rebellious, will do the exact opposite of what they ask; hence, the fake feud and exaggerated wall.

Gharavi's character is 20 years old with a bit less teenage rebellion, but just as much drive to be with his young neighbor across the wall and to get away from the traditional life he's so far lived. After a turn of events leads him to leave his provincial town, Matt finds himself in over his head in the "real world." Gharavi's performance is a compelling portrayal of leaving home and meeting the rude shock of reality for the first time.

Hart and Gharavi work seamlessly off of one another's energy onstage through a production that is poetic, hilarious, nostalgic, and uplifting all at once. And Matt and Luisa's fathers, played by Billy Breed and John Lambie, do a phenomenal job expressing the epitome of parental love: people doing ridiculous things in an attempt to help their children, such as arranging "an abduction that's emphatic, an abduction that's polite!"

"Young audience members will surely relate to the volatility and immaturity of our two teen protagonists; adults will empathize with the world-weary parents, desperately trying to control to fancies and fantasies of their children," Kevin Harris, SLO Rep's managing artistic director, wrote to New Times. "Couple these characters with some of the most iconic music ever written for the stage, and there's truly something for everyone." 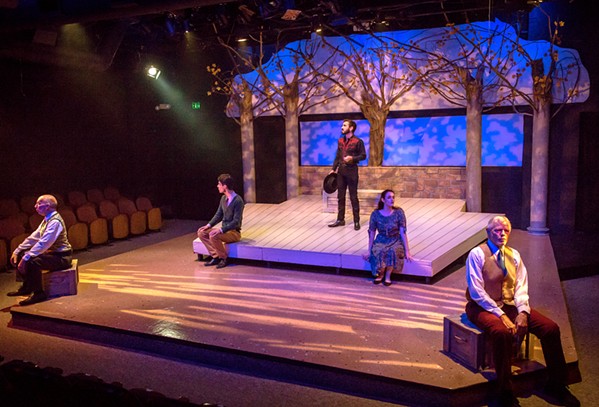 Despite all the chaos that ensues, the play ends on an unequivocally warm and uplifting note. Even El Gallo, the root of the play's havoc, has wise words to give at the end of the production: "Without a hurt, the heart is hollow."

"SLO Rep is a perfect home for this show that revolves around [this] core human truth," wrote David Carey Foster, the show director, of El Gallo's poignant line. "It is universal in theme and central to most stories ever written. And SLO Rep has become an essential gathering place on the Central Coast to tell and hear many of those stories, and reflect on them as they pertain to our lives—both as a troupe and as a community." Δ