SLO Repertory's Deathtrap has a surprise waiting around every corner

Deathtrap runs at the SLO Repertory Theatre through Nov. 17. Shows take place Wednesday through Saturday at 7 p.m., and Saturday and Sunday at 2 p.m. For tickets and more info, visit slorep.org.

With enough twists and turns to fill multiple productions, SLO Repertory Theatre's Deathtrap will leave you attempting to unravel its meta-storyline for days.

This comedy thriller, written originally by Ira Levin for Broadway, first introduces us to Sidney (Michael Brusasco) and Myra Bruhl (Melinda Parrett), a married couple who enjoy a comfortable lifestyle in Westport, Connecticut.

While Sidney once earned a pretty penny as a successful playwright, today he finds himself in a creative slump. Now, the Bruhls are forced to subsist off Myra's rapidly dwindling wealth, much to the dismay of once-breadwinner Sidney's apparent male fragility. Though he has been dry of any new theatrical inspiration for a while, Sidney continues to conduct seminars for novice playwright hopefuls in an effort to maintain some semblance of justification for his still massive ego.

The play begins with Sidney telling Myra about a fantastic script that he has received in the mail from his former seminar student, Clifford Anderson (Cameron Parker), who just happens to be writing in complete solitude while house-sitting in the nearby town of Milford. Clifford's play is a comedy thriller called Deathtrap, which begins the first of a number of meta layers that this play-within-a-play contrives.

Sidney angrily voices to Myra how he is "green with envy" over his novice student having written something so brilliant—especially in juxtaposition to his own creative dry spell. Sidney begins jesting at the prospect of inviting Clifford to come workshop the play at the Bruhl's home, with the secret intent of killing Clifford and claiming the near-flawless draft as his own.

Much to Myra's horror, the joke begins fleshing out into a real-life murder plot. Brusasco gives a convincing portrayal of this once successful writer driven mad by self-imposed expectations and a teetering ego, while Parrett's hilariously spot-on retorts and facial expressions as Myra highlight just how delusional her husband has become. Meanwhile, Parker captures Clifford's youthful naivety with ease, making it clear that his character will soon become the victim of Sidney's far-fetched fantasies. 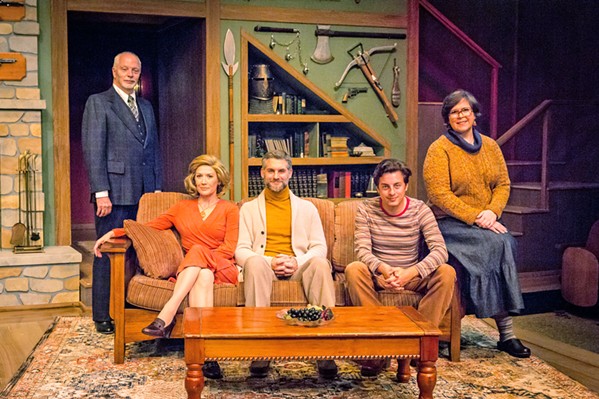 Between Sidney and Myra's superlative dialogue, it's difficult for the audience not to imagine all the ways the murder plan might be executed: The walls of the Bruhl's home are adorned with practically every weapon imaginable. If you've heard of Chekhov's gun, then this is Ira Levin's arsenal.

At this point, the plot turns begin to feel foreseeable: Sidney will surely invite Clifford to his home, murder him, take the script as his own, and he and Myra will enjoy renewed success and riches. All the while, a psychic character named Helga—with a superb performance by Zoia N. Wiseman—gives interspersed predictions that indeed keep coming true, leading the audience to believe we've got it all figured out. We watch as Sidney chokes Clifford to death, disposes of his body, and revels in his soon-to-be success. As far as murder scenes go, this one is exceedingly easy on the heartrate. After all, we've seen it coming since the curtains were first drawn.

But what happens next is certain to shock even the most alert and suspicious of audience members. As SLO Rep's Deathtrap director Kevin Harris writes, "In spite of [Levin's] gross transparency, he still manages to surprise the hell out of us." Δ