The comedic play, Greater Tuna, will show at the San Luis Obispo Repertory Theatre through Aug. 25. Tickets range from $20 to $37. Visit slorep.org to purchase tickets and see more information about the show. Right now, tickets to Greater Tuna can be purchased as part of the theatre's season package (which includes six shows) for just $185.

A two-man show doesn't quite have the same impressive ring to it as a one-man show, unless that two-man show involves both actors portraying a combined 20 characters, complete with costume changes, gender swaps, and role reversals.

And the San Luis Obispo Repertory Theatre's Billy Breed (A Funny Thing Happened on the Way to the Forum) and Jeff Salsbury (Doubt) shine as they tackle one character and costume change after the next in Greater Tuna, which opened Aug. 9. 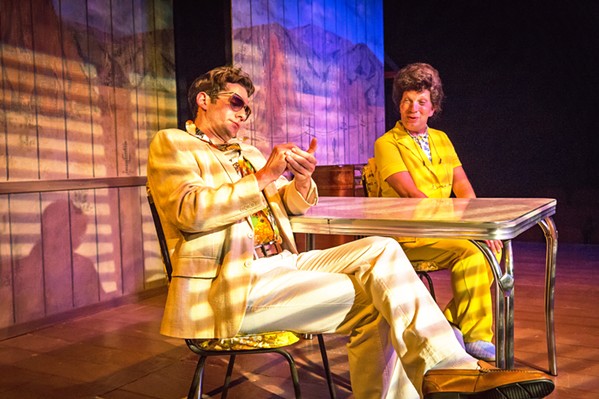 Set in the small fictional town of Tuna, Texas—"where the Lions Club is too liberal and Patsy Cline never dies"—the 1981 comedic play by Jaston Williams, Joe Sears, and Ed Howard simultaneously manages to make tender and searing commentary on Southern small-town life. Greater Tuna is the first in a series of four comedic plays (followed by A Tuna Christmas; Red, White and Tuna; and Tuna Does Vegas), each set in fictional Tuna—the "third-smallest" town in the state—with Greater Tuna being thought of as the darkest in tone of the four.

For SLO Rep's rendition, director Suzy Newman (A Funny Thing Happened on the Way to the Forum) employs a minimalist set with a barn door, rustic signs, and twinkle lights adorning the theater.

Breed and Salsbury open and close the show as Tuna's beloved, if quaint, radio hosts Thurston and Arles, who interweave actual news with small-town gossip galore. Then there's Bertha (Breed), the befuddled mom and housewife who can't understand why her young son, Jody (Salsbury), has eight to 10 dogs following him at all times, but she strongly suspects Petey Fisk (Salsbury), the hapless face of the local humane society, is to blame. The morose Fisk has his own problems, with more cats than he can count, a herd of dogs, a snake, and the constantly un-adoptable dog, Yippy, that he just can't bring himself to put down.

Meanwhile, an accidental dog killing brings Bertha's sister (Breed) and her oldest no-good son, Stanley (Salsbury), together while an actual human death connects almost all the storylines in chilling, albeit hilarious ways.

Salsbury and Breed also face off as a journalist and concerned mom, respectively—one looking to ban books from the local schools, and the other looking to get to a juicy story in a ho-hum tumbleweed town.

Whether Breed and Salsbury are playing men, women, children, or the elderly, each member of the dynamic duo plays off the other in a way that feels real, authentic, and earned. You just want young Jody to have all the puppies he wants, and at the same time, you empathize with his mother's concern, even if her stance on certain words in the dictionary is suspect.

Beyond the campy humor and redneck hillbilly jokes, Greater Tuna gets at something deeper: that we're all just trying to find our way to or from the weird place we call home. Δ