SLO Rep's production of 'Art' delves into friendship and perspective

Art will be on stage at the SLO Repertory Theatre through Oct. 14. Tickets range from $20 to $36. The show runs for 80 minutes with no intermission. Visit slorep.org for tickets and more information.

What is art? It's a question with no clear answer. When you see it, you just know.

San Luis Obispo Repertory Theatre tackles the age-old debate on stage, when an all-white canvas painting is put in front of three friends in Yasmina Reza's (God of Carnage) 1994 play, Art. Everyone has a definition that doesn't match up, resulting in the unearthing of old hurts and hidden truths.

The original show debuted in French, with Christopher Hampton (Les Liaisons Dangereuses) translating the show to English in 1996. It later ran on Broadway. With SLO Repertory Theatre Managing Artistic Director Kevin Harris at the helm, East Coast actors Travis Mitchell, Lawrence Lesher, and Timothy J. Cox take on the roles of the three friends Marc, Serge, and Yvan, respectively. All three actors have worked together previously, including on stage last year in Rounding Third (which Lesher directed), and it shows as they seamlessly play off the intensity and sincerity that each brings to their respective roles.

The set takes place interchangeably in Serge and Yvan's living rooms, which are as sparse as the contentious painting. There's simply a plain couch and several white platforms for each actor to periodically stand on to deliver a fourth-wall-breaking monologue directly to the audience. It makes viewers feel a sense of dramatic irony, basking in information unknown to the others on stage. 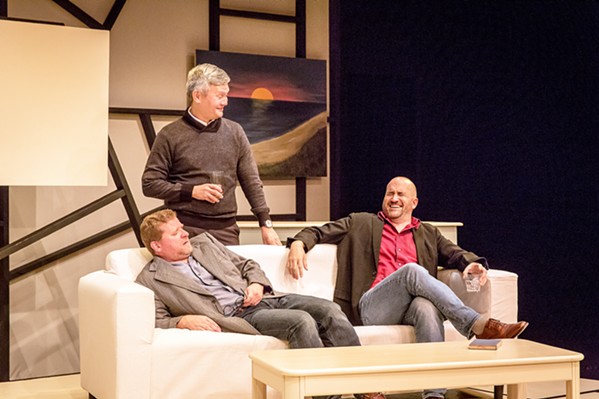 When Serge, who is described as comfortable but not overly wealthy, buys an all-white painting by a locally famous artist for a breathtaking $200,000, Marc wonders if his friend has lost his mind and seeks input from their mutual friend, Yvan. Yvan is bewildered but not overtly perturbed by the purchase.

It seems like a small thing, a simple disagreement about a random painting. But when art truly resonates with someone, it touches a part of the soul and becomes a piece of one's self-identity. Thus when Marc doesn't really seem to understand Serge's new painting, they feel like they don't understand or know each other at all anymore. This sense of loss is portrayed beautifully as Mitchell and Lesher grow increasingly passionate and angry at turns, taking stabs at old girlfriends and rehashing previous wrongdoings thought to be long forgotten. Cox as Yvan tries to be the cheerful, amiable mediator, not truly taking sides with anyone. Instead he finds that both friends turn on him, resulting in a breakdown about his own life choices.

Through their own creative process, the friends slowly find their way back to one another. After all, what is art but a display of shared humanity? Δ

Arts Writer Ryah Cooley is hanging up new art at her place at rcooley@newtimesslo.com.