SLO Repertory Theatre's production of Rabbit Hole runs through Oct. 22. Tickets range from $20 to $35. Martinis will be for sale at the bar for both shows on Oct. 21. Visit slorep.org for more information. 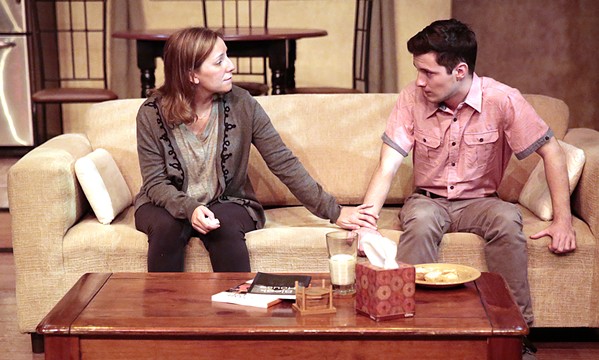 More debilitating than the tragedy itself is the simple fact that life goes on in spite of our suffering, a point that is laid bare in all its wriggly, uncomfortable agony in SLO Repertory Theatre's rendition of Rabbit Hole, directed by Ron Clark, co-founder of Iowa City's Riverside Theatre (his previous SLO Rep directing credits include 2016's When The Rain Stops Falling), and currently showing through Oct. 22.

Written by David Lindsay-Abaire, the play won a Pulitzer Prize for drama in 2007 and was turned into a film with Nicole Kidman and Aaron Eckhart in 2010. The story starts in a refreshingly unusual spot, not in the midst of chaos, but eight months after parents Becca (Christina Diaz, previously in last season's staged readings of Dead Man's Cell Phone and The Great God Pan) and Howie (PCPA alumnus Michael Phillip Thomas) have lost their 4-year-old son, Danny, in a freak accident.

In Clark's director's notes in the show's program, he wrote about the struggle to exist on the fluid, of human emotions.

"We shuffle through our days with hope in our hearts that is tempered by the knowledge that safety is an illusion and the worst can befall us," Clark wrote.

The story takes place exclusively in Becca and Howie's home. The set is an open layout that allows the audience to see the kitchen, living room, and Danny's former bedroom equally. Its intimacy is both comforting and a bit unnerving, like eavesdropping on a conversation that was never meant for you.

The question for audience members of Rabbit Hole is not if you will cry, but when, with each successive scene bringing a new layer of heartbreak. Diaz and Phillips both deftly capture their characters' different reactions to the unnatural phenomenon of having to bury a child with realism and compassion. There are no bad guys here, just humans with layer upon layer of complexity. While Becca wants to purge the house of all reminders of their son, including the family dog, Howie re-watches home videos of Danny every night.

Rounding out the cast are Erin Parsons (2017's Our Town ) as Becca's sister, Izzy; Jody Hovland (co-founder of Iowa City's Riverside Theatre) as Nat, Becca's mom; and Elliot Peters (2017's Our Town) as Jason, the teen who was in the wrong place at the wrong time. Parsons shines as the gritty bar-brawling Izzy, whose surprise pregnancy forces Becca to further examine her feelings of loss surrounding Danny. Hovland portrays the struggle of a parent trying to connect with her adult child as Becca lashes out at her mom for comparing the death of her 30-year-old drug addicted brother to that of her young son. And Peters brings a striking contrast of somberness and naiveté to the role of Jason, a kid who is forced to confront very grown-up circumstances all too soon.

But will they be OK? How will they go on? There is no neat ending to the struggles laid out in Rabbit Hole, but we are offered just the tiniest possibility of hope. "And then what?" Becca asks Howie in the final scene. "I don't know," he answers. "Something though. We'll figure it out."