SLO Rep's Santaland Diaries shows the darker side of Christmas

Santaland Diaries will show at the SLO Repertory Theatre on Friday, Dec. 14, and Saturday, Dec. 15, at 9:30 p.m. Tickets are $20 per person. The show is intended for mature audiences. Visit slorep.org for tickets and more information.

What if your best shot at (temporary) employment was working as an elf during the holiday season?

Such was the case when celebrated author David Sedaris (Me Talk Pretty One Day) was in his 30s, found himself broke and unemployed in New York City, and came across an ad in a newspaper for work as an elf at Santa's village at Macy's. That experience went on to be fodder for a story in Sedaris' novel, Holidays on Ice, which was later adapted into the one-man show, Santaland Diaries, by writer/director Joe Mantello (Wicked, Assassins). And for the fifth year, San Luis Obispo Repertory Theatre is bringing the delightful one act show to the stage. 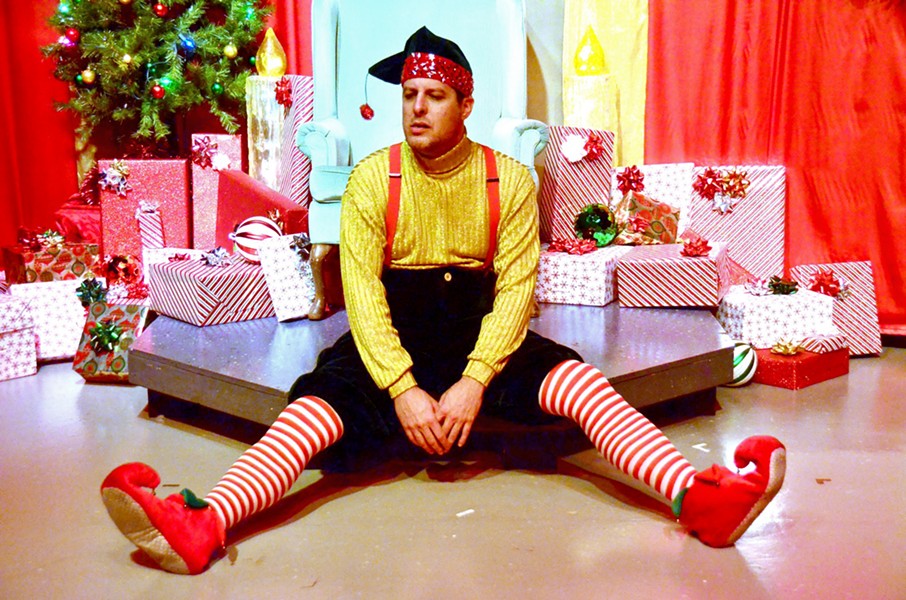 The theater's managing artistic director, Kevin Harris (A Christmas Story), stars once again as the protagonist-turned-Santa helper, deciding on the elf name "Crumpet" to get in character.

The set will be familiar to anyone who has seen SLO Rep's adaptation of A Christmas Story, featuring the same iconic department store slide and a pile of presents below Ralphie Parker's bedroom. After directing the decidedly more wholesome two-act play, Harris pulls double duty to act in this more raucous, gritty depiction of the holiday season. In one swift onstage costume switch, Harris removes his average Joe pants and hoodie and dons his festive jumper and hat, making the transformation from man to elf complete.

Harris gives a dry, deadpan performance as the protagonist/Crumpet, allowing audiences to fully soak in the reality and absurdity of his predicament. Santaland Diaries spares no details, from the hygiene practices of lady elves, to the horror of learning how to operate the register, to a child peeing in the fake snow at Macy's under orders from his mom. Even the more banal holiday moments, like a child asking Santa for presents from his wish list, get a face lift in Santaland Diaries.

"Today a child told Santa Ken that he wanted his dead father back and a complete set of Teenage Mutant Ninja Turtles," Crumpet recounts. "Everyone wants those Turtles."

The late-night hour of the show is intentional, as the play is best enjoyed by adults, or people old enough to understand the references, at least. Take the kiddos to A Christmas Story earlier in the evening, and then send them home to a babysitter so the grown-ups can enjoy a delightfully salty viewing of the Santaland Diaries. Δ

Arts Writer Ryah Cooley isn't sure if she's on the naughty or nice list. Contact her at rcooley@newtimesslo.com.