San Luis Obispo County government officials and elected representatives will convene in San Francisco on Nov. 28 for what will be their last opportunity to try to sway the California Public Utilities Commission (CPUC) to approve PG&E's application to decommission Diablo Canyon Nuclear Power Plant by 2024-25. Within the application is an $85 million payout to local agencies and an employee incentives/retention program for plant workers. 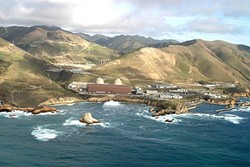 Those programs—and, potentially, the entire plan for shuttering the plant—are in jeopardy after a CPUC judge on Nov. 8 recommended the commission deny the $85 million settlement as well as curtail the PG&E employee programs since they're funded by utility ratepayers.

The judge, Peter Allen, wrote that only state legislation could compel the CPUC to approve the programs in full, or the funding could come out of shareholders' pockets.

Allen's ruling was a blow to the local coalition that negotiated the settlement with PG&E starting in 2016. Of the money that was negotiated to mitigate the closure's hit on the local economy, $75 million was set to go to the San Luis Coastal Unified School District (SLCUSD) and $10 million was to be split between SLO County and its seven cities.

The CPUC's five-member commission will hear stakeholder comments on Nov. 28 but won't make a final decision on the application until mid-December or later.

Area officials say they're focused on trying to convince commissioners that they were given the wrong recommendation from Allen. State Sen. Bill Monning (D-Carmel) and Assemblyman Jordan Cunningham (R-Templeton) sent a joint letter to the CPUC on Nov. 20 urging approval of the application, and Cunningham's office confirmed he will be present at the hearing in San Francisco.

"Everyone has been shocked by the preliminary decision," Cunningham told New Times in an email. "We need to demonstrate to the commission that adopting the joint proposal is in the best interest of our community. It shouldn't punt its job to the Legislature."

PG&E spokesman Blair Jones said the company will also be advocating for approval of its original application.

"We all remain unified in seeking approval for the joint proposal and the important programs contained within it," Jones said.

In response to questions about the potential for Diablo Canyon to shut down sooner if the CPUC ruled against components of the proposal, Jones said the approval of PG&E's application, in full, would prevent "adverse economic and environmental impacts that could be associated with a premature shutdown."

Eric Prater, SLCUSD superintendent, told New Times he believes CPUC commissioners should be able to be convinced that the community mitigation settlement is not unfair to ratepayers, as Allen's ruling asserted.

"The ratepayers across the state of California have benefited from the power that [Diablo Canyon] has generated," Prater said. "The difference is that we have been left with the reality that if something were to go wrong, we in SLO County will bear the damage that results from that. Given that, and given that the toxic material will be with us indefinitely after the closure, we feel the mitigated agreement provides some remedy for that."

According to a 2013 economic study by Cal Poly, Diablo Canyon has a $1 billion annual impact on SLO County. Once the plant is shuttered, the county will lose more than 3,200 jobs, and the SLCUSD will lose 11.6 percent of its annual budget, according to a city of SLO staff report. Δ