It’s Saturday, Sept. 17, and I have an excuse to drink beer at 10:30 in the morning! I’m at German pub Beda’s Biergarten near Broad and Orcutt, the site of an official Guinness World Records attempt at amassing the largest collection of Z-gauge model trains, the smallest scale mass-produced model train in the world, at 1:220 scale. Each car is smaller than a finger but with amazing detail. 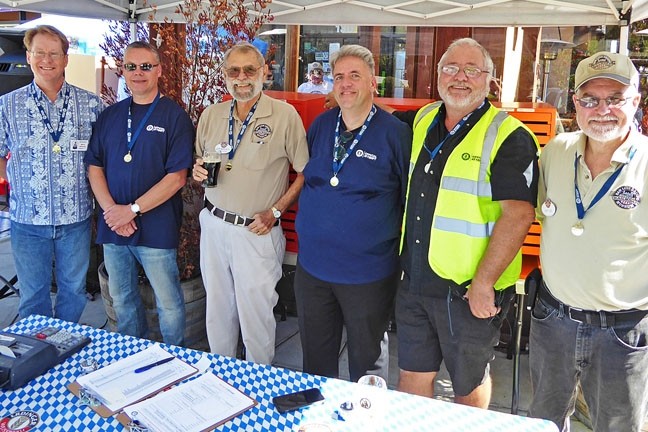 Proprietor Beda Schmidthues welcomes me with a beer almost as soon as I arrive, and I juggle it and my camera as I snap some shots of Bernd Schumacher, the train collector, as he counts the number of cars and engines he has.

As an official Guinness World Record attempt, there are a lot of rules to follow. The count must be video recorded, witnesses must be present and sign official documents, and each car and engine must be unique—no duplicates. Behind Schumacher are three orange boxes containing about 40 drawers, which he takes out one by one, lays out on the table before him, and counts the many cars inside, clicking a hand counter to keep track and then recording the tally on a sheet of paper. People wearing blue T-shirts or yellow safety vests emblazoned with the Guinness World Records logo and “OFFICIAL ATTEMPT” surround him as he counts.

Meanwhile, dozens of patrons and train enthusiasts wander around the pub and check out various train layouts, some so small they fit into briefcases. A group of young boys gaze in amazement as the tiny engines pulling various cars race around the tracks through woods, over bridges, and in tunnels that have been modeled in realistic detail.

Also on hand is Rick Sinclair, a representative of Maerklin, a German manufacturer that’s been producing model trains since 1859. Usually Sinclair only attends huge model train conventions as the U.S. rep, but since he’s located in the Bay Area and this is a World Record attempt, he drove down.

Sinclair himself has been collecting since he was 4 years old, and even though dozens of U.S. model train manufacturers exist, he’s always been a Maerklin collector.

“It’s an addiction,” Sinclair admits. “Either you have the collecting bug or you don’t.”

Suddenly Beda gets on the microphone to announce that the counting is complete, and the final tally of Schumacher’s collection is 3,160! That handily beats the old record of 1,000 different items held by a now very sad Belgian man.

New record holder Schumacher is a native German like Beda. The retired obstetrician specialized in complicated births and practiced in Saudi Arabia for 13 years, among other places, before retiring with his family to SLO about three years ago. He explains that model trains have always fascinated him and he finally started collecting in 1992.

“My wife would only agree to what would fit under a coffee table,” he smiles in regard to his Z-scale collection. “I actually have about 6,000 cars and 1,000 engines in total, but some of that isn’t Maerklin, so I didn’t bring them.”

Now that he’s secured the world record, how does he feel?

“Relieved that I got this together.”

Is he worried that someone out there will now be gunning for his record?

“No, I’m the only one weird enough to think about doing something like this.”

Beda breaks in again on the microphone to remind those gathered that the bar and kitchen are open: “When we get the official certificate from Guinness, we’re going to have another party!” he announces. “The drinking never stops!”