by Karen Garcia and Peter Johnson

Setting aside three controversial options to establish a bicycle boulevard on Broad Street, the SLO City Council unanimously directed city staff to come up with some new alternatives.

Dan Rivoire, vice mayor of the city, said the consensus of the council at its Aug. 15 meeting was to further explore the idea of removing some on-street parking on Broad and Chorro streets to accommodate a two-way cycle track—a protected bicycle lane on one side of a road. 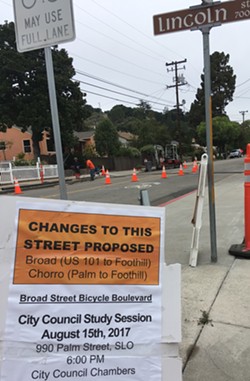 "That said, the council wants staff to continue evaluating essentially a no-change alternative or a neighborhood improvements alternative as well," Rivoire said.

While the removal of on-street parking would reduce overall parking availability for homeowners, it wouldn't hinder driveway access, Rivoire said. He added that the council wants to be sensitive to the neighborhood concerns with the project moving forward.

The initial three options put before the City Council were met with resistance from the communities that would have been impacted by the potential changes.

In the first option, traffic diverters would be put in place at three intersections along Broad Street, which would prevent thru traffic. That option also included new speed bumps and a traffic circle at Broad and Mountain View streets. The second alternative would have changed Chorro Street to a one-way northbound street and Broad a southbound one-way street, making space for protected bike lanes. The third option would have put in chicanes, speed bumps, and a roundabout to reduce speeding traffic without dedicated bike lanes.

The goal of the project is to develop a safe route connecting bicyclists from the core of downtown SLO to Foothill Boulevard.

"The intent of this effort is to provide a route that is attractive to not only experienced cyclists, but users of varying ages and ability levels," the staff report read. Δ