by Joe Payne and Ashley Ladin

More than 1,500 people marched through downtown San Luis Obispo on June 30 as part of the nationwide “Families Belong Together” protest.

The rally and march was organized in response to the Trump administration’s “zero tolerance” immigration policy, which separated undocumented children from their parents when caught crossing the southern border. According to national news reports, more than 2,000 of those children are currently in detention facilities and it’s unclear when or how they will be reunited with their families. 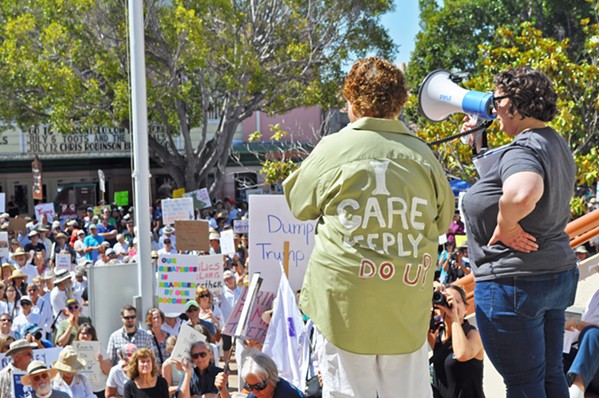 “You don’t need to be a parent to know children belong with their parents,” said Matt West, a father of four from Atascadero who drove down to attend the march. “But it makes it more heartbreaking as a parent to imagine them taking my child away for no reason and not caring enough to reunite us.”

After gathering in front of the SLO County courthouse and listening to several speakers, the crowd moved out, looping around Monterey and Chorro streets. Passing cars honked in support, garnering cheers from protesters. Organizers said the event was coordinated in a week, so they were unable to get a permit to march in the street, forcing the crowd onto the sidewalks.

Event organizer Alex Lancaster told New Times that she first heard of the Families Belong Together protest while at work. When she saw the closest protest was in Ventura, she decided to organize one in SLO.

“I want to emphasize that anyone can do this, organize or lead an event. We can do so much better than just yell at each other on the internet,” Lancaster said.

“SLO has shown its passion for truth and justice this last year and a half. To have so many people show up for immigrants shows the heart and soul of who we are,” Addis said.

The protest in SLO was one of hundreds of similar events taking place across the country. In Santa Maria, a crowd of about 200 people gathered outside an Immigration and Customs Enforcement (ICE) facility on McCoy Lane. Some protestors held “abolish ICE” signs and called for the federal agency to leave the city.

The crowd then headed from the facility along McCoy Lane to Broadway, congesting the intersection’s crosswalks for several minutes before marching back to the facility. Marchers included activist youth, the local Democratic club, and social justice organizations.

Though President Donald Trump signed an executive order reversing the child separation policy on June 20, the local protests went forward as planned, and anger over the administration’s treatment of undocumented immigrants remains.