Propelled by national events and a recent incident on campus, a group of Cal Poly students is saying “enough is enough” when it comes to a lack of student diversity and an intolerant campus culture.

Roughly 100 Cal Poly students gathered in the rain on Nov. 15 for a rally to protest hateful comments written on a “free speech wall” the week before and set the stage for a new movement they are calling SLO Solidarity. 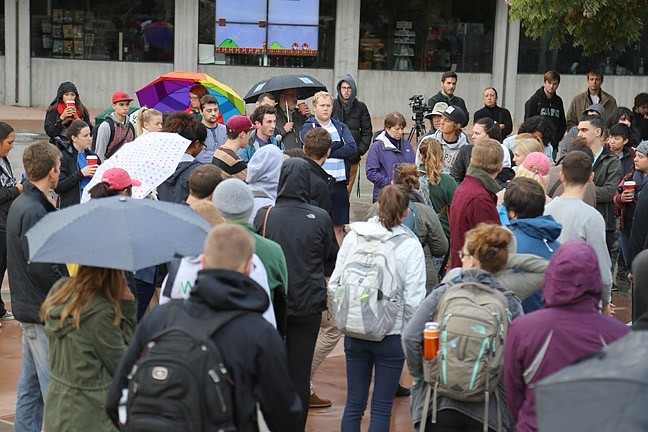 The free speech wall, organized by Cal Poly College Republicans to commemorate the falling of the Berlin Wall, went up at Dexter Lawn on Nov. 10, with black sharpies hanging on strings inviting students to express themselves.

Within a day, the wall was marred with not so nice remarks written by anonymous students: “Islam has no place in a free Western World,” one read. Another was a drawing of the Islamic prophet Muhammad holding a machine gun saying, “Don’t draw me. I’ll jihad your face.” There was also male and female check boxes that read, “pick one and one only.”

The wall, which was also cluttered with inoffensive messages, stood for the remainder of the week under First Amendment protection.

SLO Solidarity student activists say they have no intention to censor free speech. Rather, they view the comments on the wall as a very public example of an enduring problem: Cal Poly is failing to cultivate a safe and inclusive environment for underrepresented students.

“These [incidents] are not isolated, especially for students of color and minority students on campus,” said Mehra Gharibian, a SLO Solidarity student leader. “These acts of discrimination, these micro-aggressions are happening all the time.”

“There are 140 black students at this school. There is a lack of difference on this campus,” SLO Solidarity leader Kristin Michelle said. “This environment isn’t OK anymore.”

At the Nov. 15 rally, students one-by-one voiced their experiences and concerns. While some potential policy changes were discussed, including ways to diversify the student body and making courses in multi-cultural studies required curriculum, the event was primarily a forum for students to share and connect.

At times there was cheering and comradery, at other times, conflict and dissent. One student, junior Jimmy Wu, defiantly stood up to support the statements against Islam on the free speech wall. When his two minutes were up, he continued talking without a microphone.

Gharibian responded loud and clear: “This is who we have to deal with every day.”

Student leader Jabe Williams told New Times that this type of collective action at Cal Poly is long overdue. With a stark 60 percent white majority in a student population of 20,000, incidents of bigotry surface every few years. Williams believes that it is finally time for minority students to demand change.

“People tend to get desensitized whenever we see something hateful on campus,” Williams said. “But we’re seeing with student-led movements around the nation more intentional efforts to make diverse, safe spaces for their student body.”

“I and members of our team have talked with many students who do not feel welcome at Cal Poly, and even feel threatened by racist, homophobic, misogynistic, faith-bashing, and angry comments,” President Armstrong stated. “Let’s engage in ongoing conversations to enlighten and encourage each other, to include and welcome each other.”

“The administration’s email put the effort on the students,” leader Matt Klepfer said. “I just think that’s really sad to say that they don’t feel a responsibility to take it upon themselves to do something.”

What specific action is needed is not quite clear. Unique Shaw-Smith, a Cal Poly sociology professor, wrote in email to New Times that efforts to improve Cal Poly will need to come “from all levels of our campus community” and may include adding diversity education to the required curriculum.

“Ignorance leads to offense; education leads toward empathy and respect,” Shaw-Smith wrote. “The latter is what we strive for and where we need the most development. This is where we need to start.”

Editorial Intern Peter Johnson can be reached at pjohnson@newtimesslo.com.