On the long road to becoming more bike-friendly, SLO received some national recognition Nov. 16 for its bike improvements and policies

The League of American Bicyclists elevated the city of SLO from “silver” to “gold” status as a bike-friendly city in a biannual evaluation of the national organization’s rankings. SLO joins 24 other communities around the country with the designation.

“It demonstrates that the work we’re doing is valuable,” said Dan Riviore, executive director of Bike SLO County and SLO City Council member. “We’re adding new bike lanes; we’ve increased our investment in improving our bikeway networks; and we’ve made some pretty bold goals about where we want to be as a community in the long run.” 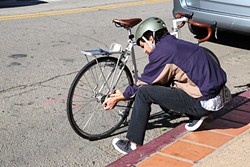 In addition to infrastructure improvements—such as the green bike lanes seen around town—Riviore attributes the promotion to new city policies that demonstrate a long-term commitment to make SLO a safer place for bikers and pedestrians. In January, the city revised its general plan to include a goal of having 20 percent of all SLO transportation trips made by bike and 15 percent by foot and promised to allocate the city’s transportation funds in proportion to those percentages.

Gold status is the third highest level in the League of American Bicyclists standings. Riviore acknowledged that there’s still much work to do.

“Our bike lane network has gaps everywhere,” Riviore said. “[The new gold status] is a call to action. It acknowledges the small improvements that we’re making and pushes us to do even more.”

On Nov. 13, the SLO Police Department announced it received a $190,000 grant from the California Office of Traffic Safety (OTS) to fund a year-long enforcement and education effort to reduce traffic-related deaths and injuries.

The police department’s press release cites bicycle and pedestrian fatalities as a key impetus behind the grant.

“After falling dramatically between 2006-2010, the number of persons killed and injured in traffic collisions has been slowly rising,” the press release states. “Particularly alarming are recent increases in pedestrian and bicycle fatalities.”