San Luis Obispo County District Attorney Dan Dow got his turn to stand trial before the SLO County Board of Supervisors on Jan. 5, during a heated discussion over a little bit of a money and a big precedent.

At issue was whether the board would approve payment to an outside counsel that Dow consulted after controversy over unauthorized compensation that was being awarded to his deputy district attorneys. 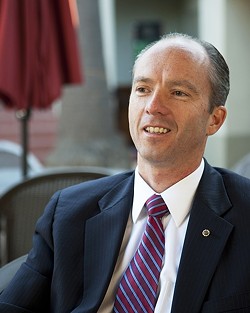 The Board of Supervisors directed Dow to discontinue that practice after discussing it at an April 7 closed session meeting.

Erb also notified Dow in an April 8 memo that the practice was unauthorized and that it must cease. Dow responded with an April 9 memo, informing Erb that the practice was immediately discontinued, per requests from the board, the county administrator, and county counsel. Dow underscored that the practice in question had been going on for more than 30 years, long before he was hired by the department and before he was elected DA in November 2014. He listed several other counties that award deputy DAs such compensation, which is done via authorization from those counties’ respective boards.

Later in April, Dow emailed Chief County Counsel Rita Neal, asking for direction to explain to staff why the process must be discontinued and how he should proceed should there be pushback.

Sometime after that, Dow sought an outside legal opinion on whether or not the compensation practice itself did, in fact, require approval.

That opinion, dated June 16, from the Fullerton-based firm Jones and Mayer, said that Dow was within his right to issue the “quid pro quo” compensation. The cost for services rendered, came out to $2,874.65, which Dow planned to pay using funds in his already-approved budget for professional services.

Hiring outside counsel, however, requires approval from the board, which Dow didn’t have. On Jan. 5, Erb asked the board to approve the payment. Erb told the board that he believed Dow didn’t realize he needed their authorization.

That kicked off a tense discussion between Dow and 2nd District Supervisor Bruce Gibson.

Gibson’s issue wasn’t whether Dow sought an outside legal opinion without authorization. He was upset that Dow sought the opinion after the county’s own legal counsel told him that it must discontinue.

“What it looks like to me is that you had to deliver some very bad news to your deputy district attorneys, who didn’t react well to it, and I imagine that their reaction was significant, and so, because county counsel wasn’t giving you the opinions that suited what you wanted to do, you went and sought outside counsel,” Gibson said.

Dow responded that he sought a second opinion, in part, because he wasn’t thrilled about how the April 7 discussion went, calling it unproductive.

“There was not much of a willingness of those that are in this room now to listen to the history and understand it from a different perspective in terms of the weight of this issue,” Dow said.

Still, Gibson grilled Dow about why he chose to circumvent the board’s direction, rather than leaving the issue to the deputy district attorneys union.

After some brisk discussion, the board voted 4-1, with Supervisor Debbie Arnold dissenting, to deny Dow’s request to pay the bill.

Later that day, Assistant DA Lee Cunningham sent out a press release that included a response from Dow.

“While I am very disappointed that the board chose not to close this matter today by approving this modest payment from the District Attorney’s already approved, budgeted, and available funds, I respect their decision,” Dow said in the statement. “I will now consider what options lay ahead including whether the decision may be reviewed by the Superior Court.”