On its heels after being accused of violating state public meeting laws, the San Luis Obispo County Board of Supervisors decided March 21 that it would “do over” a March 7 vote that allocated millions in county funds to groundwater management. The board voted unanimously to agendize the discussion for April 4.

Controversy erupted recently after the board made revisions to the county’s strategy for complying with the Sustainable Groundwater Management Act (SGMA)—the state law regulating over-pumped groundwater basins—even though that agenda item indicated only a staff “update” on the strategy. The supervisors wound up voting 3-2 on March 7 to change the policy, most significantly to call off a taxation effort on groundwater basin users, strapping the county with at least $6 million in additional costs through 2022. 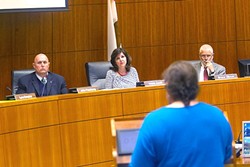 Laurie Gage, of Paso Robles, felt the board’s action violated the Brown Act, arguing that it wasn’t agendized and the public wasn’t given the opportunity to comment on the proposal. Gage filed a written complaint with the Office of the County Counsel on March 8, sparking news coverage and debate throughout the community.

Gage wasn’t the only resident irked by the board’s move. Several residents showed up to the March 21 meeting and lambasted the supervisors for engaging in poor public process.

“You went far beyond what the public might expect [you to do based on the agenda],” resident Eric Greening told the board during public comment. “Under the Brown Act, you should’ve given the public fair notice. You should rescind the action.”

County Counsel Rita Neal said the board’s decision was “defensible,” though she “strongly suggested” the supervisors reschedule the item and notice it clearly on the April 4 agenda.

“That would allow the board and public to be fully noticed on the issue,” Neal said.

The policy question at hand is whether it’s appropriate to spend general county funds on assisting groundwater basin users with SGMA compliance. Supervisor Debbie Arnold, who represents the 5th District, has expressed the view that it’s the county’s responsibility to pay for the crafting of sustainability plans without levying new taxes on the beneficiaries. Supervisors John Peschong and Lynn Compton, representing the 1st and 4th districts respectively, agreed, but 3rd District Supervisor Adam Hill and 2nd District Supervisor Bruce Gibson viewed that as inequitable.

In addition to discussing groundwater on April 4, the supes will tussle over further Brown Act concerns. The board will decide whether to send a second complaint by Gage to the District Attorney’s Office for investigation. That complaint points to concerns about “serial meetings”—where information is relayed from one elected official to another through a third party—taking place between Arnold, Peschong, and Compton and Creston resident Greg Grewal, a Water Resources Advisory Committee member.

Gage obtained a January letter signed by Grewal to a recipient whose named is redacted indicating that he knew that a majority of the supervisors would take the course they did on March 7. Arnold and Peschong, though, have publicly stated their positions on the SGMA strategy in the past.

“We’ve been discussing groundwater since I was elected,” Arnold said on March 21. “I’ve said a lot of things in the public setting. I have not been engaged in serial meetings on this topic.”