Stakeholders on the long, bumpy road to possible management of the Paso Robles Groundwater Basin hit yet another pothole.

This time, the rough route got the best of the county code amendments needed to approve the proposed Countywide Water Conservation Program. The SLO County Board of Supervisors was originally scheduled to consider the amendments on Aug. 11, but those plans changed when detractors swayed a majority of the board to temporarily delay the decision during its July 21 meeting, in which the program was scheduled for introduction. Instead, the routine step became anything but—like most things related to the ailing basin—as the line between process and politics became seemingly blurred. 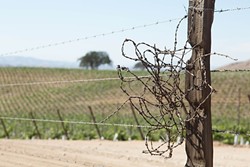 The code amendments were originally fast-tracked so that, if passed, the program would pick up where the two-year Paso Robles Groundwater Basin Urgency Ordinance leaves off after it expires at the end of August.

The urgency ordinance, passed in haste on Aug. 27, 2013, bars any new and expanded groundwater pumping over the basin unless vested rights exemptions or offset requirements are met.

First District Supervisor Frank Mecham, whose district includes part of the basin, pulled the proposed ordinance from the July 21 consent agenda to express some concerns with the public notification and input process and with the way the hearings overlap with those at the SLO County Planning Commission, which hears the item on July 30 before passing along recommendations.

“It seems like it’s a little bit backwards,” Mecham said. “I don’t think it’s going to hurt us to take this time and do this right. We need to do this right.”

The indication that Mecham—who frequently straddles the fence when it comes to decisions involving the basin—would fall on the side of no action, for now, irked 3rd and 2nd District supervisors Adam Hill and Bruce Gibson, respectively.

“I guess we can go ahead and delay this because that’s really the tactic here,” Hill said. “Usually what we hear from my colleagues is that we’re doing everything we can, but when it gets to push comes to shove, we kind of see people opposing everything we can.”

“This is quite astounding to me,” Gibson added. “To suggest that the public doesn’t know about this flies flat in the face of hours and hours and hours of public meetings.”

“It’s been a process that I haven’t seen before in this county,” Arnold said. “This will only affect certain people in certain places. I have an issue with that, that we’re starting to piecemeal the process.”

Supervisors voted 3-2 (Hill and Gibson opposing) to delay the first reading until Aug. 11, which was originally marked on the calendar for a final reading and possible decision. The delay will leave a larger gap between the program’s potential implementation and expiration of the urgency ordinance.

That gap however, isn’t likely to lead to a rush of new vineyard plantings, said Dan Merrill, owner of Mesa Vineyard Management in Templeton.

“This time around there’s obviously been more constructive notice,” Merrill said. “Everybody knows there’s a moratorium.”

Before the urgency ordinance was initially passed, there was a run on well permits and other measures necessary to meet exemption requirements. Now, however, the industry understands that new plantings are generally off the table, for now.

This isn’t the first time the Countywide Water Conservation Program has been delayed. In May, Santa Margarita-based land-use attorney Sophie Treder, who’s already sued the county over the urgency ordinance, alerted the planning department that a notice for the environmental impact report wasn’t properly posted. After verifying the oversight, the matter was postponed to allow the necessary noticing.

The program includes mandatory water conservation measures that would apply to all of SLO County’s unincorporated areas, including new provisions regulating well construction and permitting; domestic water use in outdoor irrigation, swimming pools, decorative fountains, and washing vehicles; hotels and restaurants; and winemaking.

Critics of the program take issue with another piece of the program, which would require a 1-to-1 offset of water use for all new buildings and irrigated agriculture that draw groundwater within the Paso Robles Groundwater Basin or the Nipomo Mesa Water Conservation Area. Both areas are in a Level III Severity water shortage and have been the subject of several measures to reduce aquifer decline. The program would exclude the Atascadero Sub-Basin, which is within the Paso Robles Groundwater Basin.