As the summer winds down and school returns for most, there can be a sense of imminent disappointment. No more Saturdays spent sunning on the sand; no more spontaneous adventures to exotic landscapes unknown; and, for those who are keen to be moved by a groove, no more summer music festivals. Alas, the only benefit of the upcoming autumn seems to be a break from the relentless pain of sunburns and, of course, Starbuck’s Pumpkin Spice Latte. Fear not, my friends. There is one last hurrah before the shades draw to a close on the sunniest of seasons. That’s right. It’s time for SLO Symphony’s Pops by the Sea.

For years now, SLO Symphony has melded the grandeur of orchestral arrangements with the fun and variety of popular music for an afternoon of unique and master class entertainment. Most recently, their acts have included the eclectic gypsy jazz act Café Musique and Spanish classical guitarist José Maria Gallardo del Rey. This year, they’re busting out the big guns. Because, this year, it’s all about rock. Original lead singer of the English prog rock band Yes, Jon Anderson, will be headlining this year’s festivities and the choice couldn’t have been more fitting, according to SLO Symphony’s music director Michael Nowak.

“I have known Jon for as long as he’s been in town,” Nowak said over the phone. “He’s a very big classical music buff. He knows it really well, in some cases better than me. He’s a musical force, and I’m just blown away that he can do all this.”

When Nowak says Anderson is a musical force, he isn’t exaggerating. The long-time Central Coast resident is not only a singer who toured with Yes over the course of 40 years, but an accomplished composer who has written concertos, piano pieces, and a few operas in addition to his numerous solo albums and his most recent collaboration with French jazz violinist Jean-Luc Ponty, the Anderson Ponty Band. He’s also a huge SLO Symphony fan. 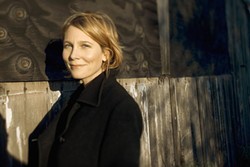 “Since I got here, I’ve wanted to see what was going on,” Anderson said in a recent phone interview. “I saw the symphony hall when it was being built. I was just generally interested in what was going on locally. I saw the orchestra play a couple times, and it was amazing. The orchestra played so beautifully. So, I spoke with Mike [Nowak] a couple of years ago about maybe doing Pops.”

Fans of Anderson’s work with Yes know that the band’s work is already heavily influenced by symphonic arrangements. Formed in 1968, they became widely regarded for their complex and sinuous material that often took lyrical inspiration from otherworldly elements and infused a diverse range of musical influences from jazz to pop to psychedelic rock. The Pops by the Sea program will include some of Yes’ biggest hits, from the 8-minute epic “Roundabout” to the the more pop-inspired anthem, “I’ve Seen All Good People.” Anderson will also be covering some golden oldie standards, including The Beatles’ “A Day in the Life” and “Blackbird,” with accompanying vocals from local singer-songwriter Inga Swearingen.

Swearingen’s melodic blend of jazz and folk has been featured on Garrison Keillor’s popular radio variety show, A Prairie Home Companion, and released three albums to date. And, she’s been a regular presence with the SLO Symphony, working on some of their children’s shows and Pops by the Sea before. And, when the opportunity to work with Jon Anderson arose, she jumped at the chance. When he first arrived on the Central Coast, she was playing spoons with an Irish session band at the Frog & Peach and one day, he just walked in. Soon after, he invited her and her band to record on his 1997 Celtic-influenced album, The Promise Ring. And now, she and Anderson will be working together once again on songs that Swearingen remembers fondly from her childhood.

“I’m a big Yes fan,” Swearingen said over the phone. “I can remember when the songs, like ‘Roundabout,’ were on the radio. I can even remember where I was when I heard them. It’s going to be very interesting, hearing me sing in my lower register and Jon in his higher register. I’m so enjoying learning his music. He is very free in his writing, which is nice because it gives it an unpredictability that’s catchy enough for radio, but unpredictable in a way that stay interesting and dynamic throughout.”

Swearingen will be joined by her sister Britta and some additional backing vocalists for a total program of around 10 songs. The symphony will also be performing some solo arrangements, such as the theme from 2001: A Space Odyssey and “Stars and Stripes Forever.”

“I think everybody wins in this,” Nowak said. “It’s a great pleasure to take two different people of such virtuosic quality and see how they blend.”

Jessica Peña wishes she could play the spoons in a pub. Give her song suggestions at jpena@newtimesslo.com.