The San Luis Obispo City Council will discuss on March 16 whether or not to allow future night hiking on Cerro San Luis Natural Reserve—a question that's divided locals and comes as the city wraps up a pilot program that permitted some seasonal trail use after dark. 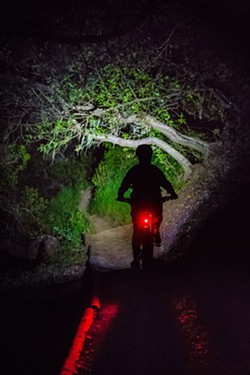 Since 2018, during winters, locals could claim up to 65 permits each evening to access Cerro San Luis (also known as Madonna Mountain) until 8:30 p.m. For trail enthusaists and 9-to-5 workers, the extended hours provide more opportunities to enjoy the open space. For conservationists, it risked further disruption of wildlife habitats.

Initially planned as a two-year pilot, the City Council voted in November 2020 to extend the program for one more season, citing the value of outdoor exercise during the COVID-19 pandemic and the fact that city staff hadn't finished a report recapping its impacts.

SLO officials have now completed that report, which offers data and analysis about the program. It shows that nightime use of the mountain skyrocketed during the month of December, when the Madonna Inn erects a Chrstimas tree of lights at the peak. While in the other months, the number of hiking permits averaged between 20 and 30 per night, they often maxed out in December.

"Once the lights go up on the mountain, it gets really, really popular," said Bob Hill, SLO's sustainability and natural resources official. "We've had more interest than we can accommodate. We've had to turn people away."

Hill said that choosing Cerro San Luis for the pilot program was never about the tree—the open space has a designated parking lot and an emergency access road, among other desirable features for night use.

The rush in December brought both benefits and drawbacks, he said.

"It's a local tradition, and people love to do it. I certainly heard a lot of really positive feedback," Hill said. "There have absolutely been occassions where we had some pretty serious crowding."

The report showed that hikers made up the majority of evening trail users—of the 8,609 total permits pulled, 90 percent went to hikers and 10 percent went to mountain bikers. It also revealed that the overall number of trail users increased every year. Over the three winters, total traffic on the mountain increased by a third, according to counting devices.

Instances of hikers using the open space without a permit also soared—those volumes more than doubled from 2019-20 to 2020-21, reaching 1,848 this past winter.

While park rangers issued just one citation throughout the pilot program, their contacts with hikers increased more than fourfold.

One medical emergency transpired on the mountain at night—a sprained ankle.

With the report in hand, Hill said it's now time for the City Council to determine next steps. The council could make the pilot program permanent, tweak it, or leave it behind.

If it's continued in any way, city staff will have to prepare a new environmental document, per state law, and will ask the council to approve additional funding.

At least one council member is in ardent opposition. Jan Marx told New Times that the city report "confirms" her stance against night hiking. Marx said the program, which "only benefits a small number of people," is costly and degrades the environment. A survey of trail users found that one-third encountered some form of wildlife on their hike, while one hiker reported seeing a mountain lion.

"In my opinion, the 'pilot program' should never have been allowed in the first place, let alone extended another year, without full environmental review," Marx said. "The program is harmful environmentally and too expensive. It should be terminated." Δ