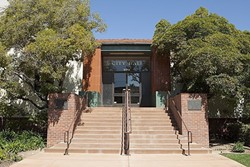 Mayor Heidi Harmon told New Times on Aug. 21 that she views the issue of council compensation as one about achieving equity in city leadership. Harmon said it's challenging for working to middle class residents to even consider a run for local office given its time commitment and lack of pay.

"The role of mayor, in particular, and city council have really evolved over the years and we've taken on a lot more responsibility," Harmon said. "Living in the sixth most expensive place to live in the U.S., you have a real challenge in terms of being able to do this job and do it well. To me the biggest and most important aspect is that lack of compensation in turn directly impacts who can run and be in these roles, which directly impacts policy."

In the at-times contentious debate over compensation, Harmon hasn't shied away from directly taking on constituents about the issue. In a July email, resident Dia Hurd asked Harmon to "resign" or "quit complaining" about her salary.

"The only way you get more salary is it HIT THE CITIZENS UP YET AGAIN FOR MORE CITY TAXES," Hurd wrote. "If you can't afford to serve on the council, give us a chance. We don't whine like you all do!"

In response, Harmon told Hurd that her email was "off-base, ageist, and classist," and that her "lens is based in white supremacy."

"[I hope] we can have constructive community conversation about attitudes such as yours and how detrimental they are to the democratic process," Harmon wrote.

The 2020 Council Compensation Committee will meet over the next nine months and make final recommendations to the City Council by May 2020. Δ