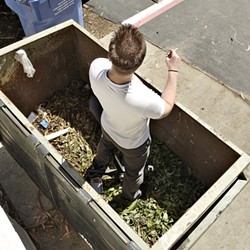 Smoke ’em if you got ’em: Come May 20, lighting up in downtown San Luis Obispo could get you cited.

On April 6, the City Council voted 4-1 to pass an ordinance that outlaws smoking in indoor and outdoor public streets, sidewalks, parking garages, and any other areas frequented by non-smokers.

But don’t give up all hope, nicotine-lovers. There are a few exceptions. The ordinance doesn’t cover private residences, up to 25 percent of hotel rooms, or areas “in which no non-smoker is present and, due to time of day or other factors, it is not reasonable to expect another person to arrive.” According to the council, this clause would protect designated smoking patios common in many downtown bars and restaurants.

The biggest point of contention, however, was the grandfathering of existing tobacco retailers to allow smoking inside their businesses, provided that owners install ventilation systems within six months.

Just as the Los Osos sewer battle has Julie Tacker and Paavo Ogren, and the fight for the dunes has Nell Langford and Kevin Rice, the skirmish over SLO smoke has its two central figures: Doug Shaw and Terry Treves.

Shaw, owner of the Sanctuary Tobacco Shop on Chorro Street, has been engaged in a bitter dispute with Treves, owner of neighboring lingerie store Fanny Wrappers, over “lingering smoke” Treves said is costing her business.

“This is the meat of it,” Shaw told New Times. “[The Sanctuary] is a place where friends know they can come and relax and enjoy a fine cigar. If we can’t smoke here, that’s huge for my business.”

A number of council members still thought the ordinance didn’t go far enough, but Councilman John Ashbaugh, the sole dissenter, supported the original proposal before the revision was made to include ventilation systems for retailers.

Acknowledging that banning smoking inside retail shops would have an impact on tobacco-related businesses, Mayor Dave Romero supported the grandfather clause.

“It’s very difficult for me to pass an ordinance that puts somebody out of business,” he said.

Unlike the Dec. 1 meeting at which the council banned smoking in outdoor recreational areas and directed staffers to formulate a more comprehensive ordinance, many people showed up to oppose the proposal, claiming it’s less a health issue than an “I don’t like this, so let’s ban it” issue.

Steve Hansen, a former tobacco executive who was part of the task force that helped draft the ordinance, said nothing could be further from the truth.

“There are so many studies that show second-hand smoke is incredibly harmful, indoors or outdoors,” he said. “This is protecting people with real needs, and it doesn’t infringe on other people getting their fix.”

The latest ordinance comes 20 years after the city became the first in the nation to ban smoking in public indoor places. ∆