SLO traffic collisions in 2016 were fewest ever, city says

San Luis Obispo officials say 2016 was the safest year to be on its roads in recorded history.

Traffic collisions within city limits were at their lowest levels in 16 years, according to an annual safety report released by the city Jan. 30. Total crashes involving cars, bikes, and pedestrians were down 58 percent since 2001, when the city first produced a report. 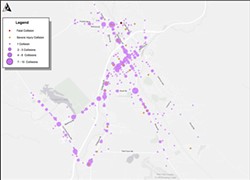 Collisions overall declined 9 percent from 2015, while bicycle collisions were down 11 percent.

"Now in its 16th year, the program has demonstrated continued effectiveness and lasting outcomes," a joint staff report from the SLO Public Works Department and Police Department stated.

Pedestrian collisions increased from 2015 to 2016. They're up 17 percent, from 23 to 27 incidents, which is the second highest in a decade. The only fatal collision in 2016 involved a pedestrian struck on Foothill Boulevard.

The city relies on the collision report to target traffic safety initiatives and infrastructure projects where they're most needed. Intersections marked for improvements based on the 2016 data included downtown intersections at Marsh and Nipomo streets, Higuera and Nipomo, and Marsh and Toro, in addition to other well-traversed intersections like Foothill Boulevard and Broad Street.

For bicyclists and pedestrians, Santa Rosa Street proved to be the most treacherous road in terms of collision rates, while for vehicles, the downtown intersections saw the highest rates.

City staff will present the annual report to the City Council on Feb. 6. It's usually delayed by one year due to late reporting of traffic accidents, extended investigation periods, and time-consuming analysis, according to the city. Δ