SLO Veg box signups are on the rise during the pandemic, and the farmers have been planting more

Photos Courtesy Of SLO Veg EAT YOUR HEART OUT When you order a harvest box from SLO Veg, you receive a colorfully curated box of fruits and vegetables from local farms and food purveyors.

Depending on your needs, you can choose from four SLO Veg harvest box sizes, select add-ons, and choose your delivery method. Visit SLO Veg online at sloveg.com, email service@sloveg.com or call (805) 704-8230.

"Holy cannoli," Hill said she expressed on March 13 as she faced massive sign-ups and emails pouring in over a three-week period. Hill said the influx of sign-ups was nothing short of "glorious."

The biggest surge in customers has been in the Los Osos/Morro Bay/Cayucos area. That coastal area is her biggest route. The convenient model of delivering fresh, certified organic or organic and sustainably grown, non-GMO fruits and veggies to your home or close to your home for pickup was ideal for the times.

SLO Veg was able to bring on new farmers because of it. She hired new administration staff and new drivers. They bought additional vehicles and conveyors. And now she's about to purchase a walk-in fridge. Hill was pretty giddy about it all and hopes to keep the momentum. More demand means more farms, more planting, more food, right? But to continue with new CSA (Community Supported Agriculture) boxes, she is hoping the weekly subscriptions decide to stay on board.

Hill calls SLO Veg's 40-plus farmers and partner farmers—from Trina at Templeton Valley Farm to Jerry at TKP Organic Farm in Santa Maria—her "brothers in arms." And at the same time, she considers her customers her greatest assets. When you sign up, she takes it personally and tells her staff to pack that box like they're packing it for their best friend. Each box is designed for you.

"Are you serious?" she asked me.

It's true. I went through a squash soup phase that knocked the vegetable from my shopping list.

"We customize. So if there are items you don't like, we'll sub them out. And we'll match it dollar for dollar," she said. "You just have to tell us."

You can add in artisan market items from flowers to olive oil, and you can even tack on fresh local fish. In early July, as I wrote this column, SLO Veg was offering fresh local salmon on Monday and fresh local sea bass on Thursday, which is one less trip to Giovanni's Fish Market. Instead, Giovanni's aims that Morro Bay fishing pole right at your door.

The boxes come in four sizes with prices ranging from $31 to $46. What's really cool is how much fresh fruit and veg you are getting for the price. I tend to shop at farmers' markets quite a bit, and when I did the math, I noticed that SLO Veg is a smokin' good deal. I have also had different farm shares throughout my years in different towns, but I've never found one with so many different farm partners.

Buying locally has its perks. The food tastes better, for one, and Hill will emphatically back me up on that claim. In fact, she'll tell you herself: Once you taste the SLO Veg food, you don't need to go back to the produce aisle of the grocery store.

Another plus of the farm share is that you are supporting and sustaining local farmers, the economy, and the community. The variety of farmers on the "our growers" part of the website includes: Brandon Sanders of Robin Song Farms (who's been working with the schools of San Luis Coastal Unified School District), Raskephas of Encino Grande Ranch (whose trees grow my favorite source of vitamin citrus), and restaurant-quality veggies from the locally revered Seth and Zina Engel at Loo Loo Farms. The list goes on and on with the area's most conscientious farmers, fish markets, and artisan food purveyors. 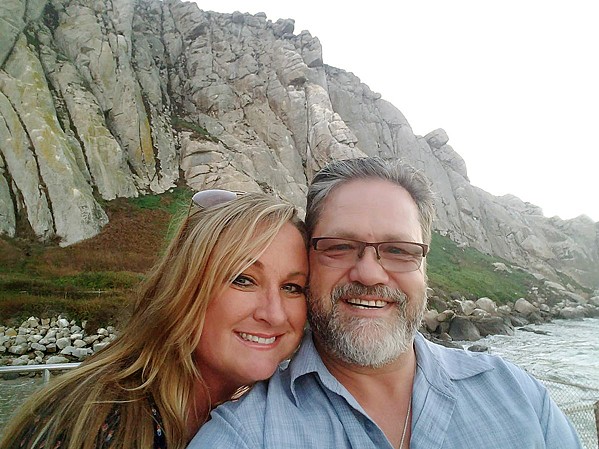 From Oklahoma, Hill is the oldest of eight children. An avid cook, she learned to turn produce into dinner from her grandma and mother. Hill earned a degree in hospitality/tourism from Stevens-Henager College of Business in Utah, moving to SLO in 2000. After working at San Luis Diagnostic Center, Rachael Hill took a job working at SLO Veg in 2009. In 2016, Hill became the owner of SLO Veg after buying founder Dan Melton's shares. Since then she's led the CSA on a mission to expedite meeting the need for pesticide-free fruit and veggies in SLO County.

Alan is also a foodie, growing up under the tutelage of his grandmother as well. He earned his culinary degree at Le Cordon Bleu in Idaho and, like Hill, loves to cook.

"I am such an advocate for my farmers," Hill said. "When it's picked the morning of, and brought to you the same day, or the next day, it tastes great. Do you know where your food comes from really? When you go to the grocery store, ... where did your food come from?"

Many of the SLO Veg farmers grow sustainably and organic. And some are certified organic.

"I don't want GMO or pesticides," Hill said, and anyone who understands the California organic certification process knows the cost is huge, and sometimes, quite frankly, not worth the hassle. Hill understands that some of the farmers she works with may not hold the CCOF (California Certified Organic Farmers) certificate, but still practice sustainably and organically.

SLO Veg is also GAP (Good Agricultural Practices and Good Handling) certified, so no one needs to worry about microbial food safety hazards.

One thing I learned from Hill that made me feel a little better about the state of packaging and plastics during the pandemic response was that SLO Veg is committed to reducing environmental impacts. Buying local produce reduces the use of fossil fuels. Another nifty thing they're doing is using compostable, biodegradable bags. The packing will break down in your compost in 10 to 20 days!

As time moves on, Hill said so have some of SLO Veg's customers, but she said she hopes more customers hang on and make SLO Veg their weekly commitment to small, local farms.

"You still gotta eat!" she said

And we might as well support local farmers while we're doing it.

Editor's note: This article was updated to clarify the founding of SLO Veg. Δ