San Luis Obispo is a college town with an alcohol problem. No news there. But what you might not know is just how much time local officers spend arresting people for violating penal code 647(f), i.e., drunk in public. 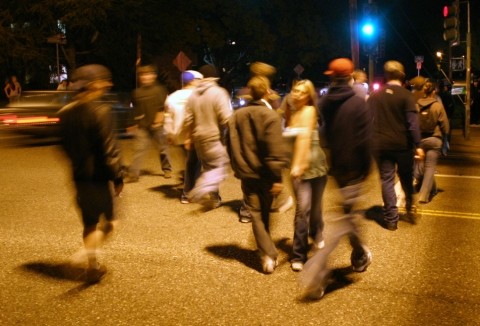 Big city vs. small city policing aside, the high number of drunk in public arrests begs attention. Captain Dan Blanke, spokesman for SLO PD, says on a typical night alcohol-related incidents are the biggest problem for officers in the city, and on any given weekend night there are no more than ten officers on duty.

Â â€œIt certainly is a problem and it does take up a lot of our time,â€? says Blanke. â€œThat sucks resources from everywhere else.â€?

The amount of time it takes to apprehend, arrest, and transport drunk in public arrestees to county jail on Kansas Avenue certainly dominates the workload of SLO PD officers. â€œThe goal of 647(f) arrests,â€? says Blanke, â€œalthough itâ€™s not pleasant for anybody, is to put the [offenders] some place safe for at least four hours, so they can sober up, so nothingâ€™s going to happen to them, and theyâ€™re not going to do something to somebody else. Itâ€™s a reasonable goal.â€?

In 2004, when SLO PD made those 957 drunk in public arrests, they made 333 arrests for misdemeanor or felony driving under the influence. Captain Blanke says the discrepancy between drunk in public arrests and driving under the influence arrests has to do simply with the way people are caught. Itâ€™s more common to see someone stumbling down the street than it is to see someone veering over the double yellow line.

And the fear that youâ€™re more likely to get caught walking home drunk, as opposed to driving, is one commonly voiced at local bars. Based on the stats, the fear seems justified. It is of course impossible to know how many people are actually driving drunkâ€”meaning those who donâ€™t get caught.

Another factor that contributes to the belief that the local law enforcement agencies hand out drunk in publicâ€™s like party favors (an analogy I recently heard at a local bar), is the burden of proof given to officers during an arrest. No Breathalyzer, or field sobriety test is needed for an officer to arrest someone for drunk in public. Under the law, simply smelling of alcohol could be reason enough for an officer to make an informed decision that one cannot â€œcare for his/her own welfareâ€? and must be arrested and put in the drunk tank for the night.

â€œOne thing that bothers a lot of people,â€? says Blanke, â€œis that that particular offense does depend a lot on the opinion of the officer. But itâ€™s supposed to be an educated opinion and a fair and reasonable opinion. In my own experience the offense manifests itself in a lot of different ways.â€?

Is the police department concerned that it may be sending a mixed message to citizens, and students, about choosing to walk home drunk instead of driving? â€œWeâ€™re not concerned,â€? says Blanke, â€œthat thatâ€™s causing a problem. Weâ€™re totally into personal responsibility. If you want to engage in certain kinds of behavior you have to assume the responsibility that goes along with it.â€?

To help deal with those who are not personally responsible, the SLO police department, which is not currently fully staffed, is working on applying for a few grants through the California Department of Alcoholic Beverage Control. The department hasnâ€™t yet submitted any proposals to the council. â€œItâ€™s premature to talk about specifics,â€? says Blanke.

But, Blanke adds, over the years â€œPeople have become more responsible in terms of having designated drivers.â€?

One way to avoid getting busted for being drunk in public or driving under the influence is, of course, the almighty taxi. Says Blanke, â€œIf theyâ€™re still sharp enough to see that yellow car and get in that back seat, weâ€™re going to leave them alone.â€?Â  âˆ†