Slobs and snobs not admitted here

While reading a July 9 New York Times report online about "tastings gone wild" at New York state wineries, I was miffed by the quote "slobs and snobs." It was made worse when I read that those words came from a tasting room employee who referred to the people they serve as either drunks or elitists. Still, I had to laugh at the savvy, unnamed vintner who hired this cynic to represent their wines. Honestly, I've witnessed pourers who acted like this one more often than I've seen drunks or snobs at wine bars.

I know wine aficionados from around the world both professionals 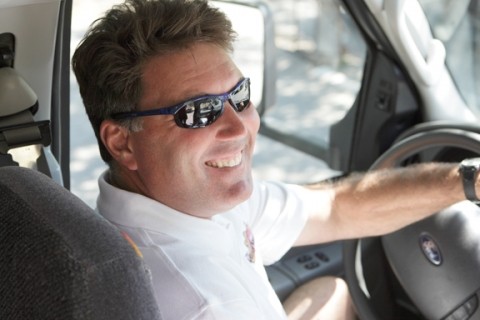 # and hobbyists who love visiting tasting rooms, but they're out to collect wines, never to get drunk or feign aristocracy. I also know many wonderful people working in tasting rooms Eberle, Tobin James, and Edna Valley Vineyards leap to mind who enjoy their jobs and make their guests, snob or novice, feel right at home.

That well-timed story happened to come out the Monday after I spent a Friday afternoon visiting five Paso Robles wineries with 10 tourists on the Wine Wrangler's tour. I wanted to see it through their eyes, and although none of them were wine professionals, I found them all interested in learning about wine, and they purchased everything they liked. Nancy Malafatopoulos from Easton, CT, who was en route to a teacher's convention in Anaheim, said she was buying wines to share with her peers at the conference.

"I've only had one bad tour in three years," reported Coy Barnes, founder of the Wine Wrangler and the man who runs the touring business and its wine club with his wife Sarah. "We've probably had 3,000 people on our tours and everybody I've had I'd be happy to have back."

After a pause, he added, "with the exception of three people."

It's hardly worth noting, but since Barnes didn't clarify afterward, I called several wineries to hear their stories about bad behavior in their tasting rooms. Not only is it more common than I realized, I learned that people often forget even common courtesy and some do things I would never have imagined. Interestingly, it usually only happens on Saturdays but more on that later.

During my tour with the Wine Wrangler, I was impressed straightaway with Barnes, who made sure his guests received V.I.P. treatment in every tasting room. Of course, it's partly due to Barnes earning the vintners' respect that ensures his guests are treated well. At the end of each tasting room visit, Barnes helped everybody with their purchases and then carried their wines to the bus. It's important to note that many people mistakenly believe the Wine Wrangler is paid by the wineries. He isn't. Nor do the drivers receive any kickback for wines purchased. Barnes strictly earns through selling tours.

# In fact, the tourists determine which winery route the driver chooses. When Barnes or one of his other drivers picks up guests (usually at two or three hotels) they ask them their preference in wine, be it all red, Rhone specialists, etc. The driver then chooses wineries that will provide what they're looking for along a particular area, say the west side of Paso Robles. They also accommodate special requests for a particular winery en route, which happened with the group I joined. Every tour covers four to six tasting rooms, depending on how much time the guests spend getting to know each one.

Importantly, from beginning to end, Barnes kept us all mindful of staying sober and hydrated. With temperatures higher than 100 degrees that day, it was certainly necessary. All of his buses are air-conditioned, so we rarely noticed the heat. When it came time for our picnic lunch, provided in the tour package, he arranged to have our meal held in the cool climate of Castoro's art gallery so we didn't have to sit outside in the heat. I highly recommend the Wine Wrangler for its educational value and Barnes' efforts to fulfill the desires of every unique character on the bus while keeping the five-hour tour thoroughly entertaining.

One couple from Texas Scott and Trish Autrey said they were visiting relatives Barry and Becky Oxford, who live in Atascadero. Autrey said they had taken them to Paso Robles wine country before, but this time they wanted more than a designated driver.

"We talked about a limo, but we wanted to tour with someone knowledgeable," Scott said. "Barry found the Wine Wrangler at Costco that display really does a service for them."

Noting that he particularly liked tasting Cabernet Sauvignon in its many variations in Paso Robles, Scott added, "It was all fun. Coy really knows what's going on."

The Wine Wrangler offers a perk for locals who work at hotels, restaurants, and tasting rooms: a free tour to get to know the region's wineries. On the last Tuesday of each month, participants gather at the Paso Robles train station where the tour bus picks them up. It's very much like the tour provided for tourists, from the number of tasting rooms visited to the picnic lunch. Cliff Stepp, creator of GrapevineRadio.net (with whom I co-host a live show on Saturdays), has joined them for three tours and loved them all.

"The first time I went along, there were only two people I knew, but by the end of the tour you're all friends. There's so much good humor and a great camaraderie all around," Stepp said with a laugh. "I've known Vic Roberts 18 years and I'd never visited his winery, Victor Hugo, in Templeton. On another tour, I saw Larry Gomez, whom I've also known for years, and got to see his new winery, Via Vega."

The aforementioned problems on Saturdays are mostly because of the boisterous bachelorette parties. As one vintner put it: "Guys go to Vegas. Girls go wine tasting." The bachelorettes aren't into wine appreciation they're the infamous drunks looking for a free ride to inebriation. These generous wineries won't tell the brides with their cute little veils that they're not welcome. But a few of the revelers in these groups should buy at least a bottle of wine in appreciation of the winery's patience with the fluid party.

Whenever you're planning to visit the wine trails with like-minded friends, think about how nice it would be to relax and enjoy yourself while someone knowledgeable about wine handles the driving. I know most people elect someone in their group to drive, but think about this. They came along to have fun, too, and it's not nearly as enjoyable when you're stuck behind the wheel. Visit www.slowine.com or www.pasowine.com for a full listing of winery tour services and limos. Then kick back and ride to your favorite wineries in style while learning what makes them so special. I promise you'll have a bon voyage.

You can reach New Times' Cuisine columnist at Kathy@GrapevineRadio.net.