Alchemy is the perfect name for Jerime "Jae" Ford's new album. The 43-year-old SLOcal who grew up singing in church magically transforms an eclectic mélange of sounds into these deep-groove tracks you can feel in your bones. This is an album crying out to be heard in headphones to fully experience all the textures.

The 17-track CD, with graphics that emulate a vinyl record, opens with a spoken word intro in Ford's rumbling electronically transformed baritone: "To create is to exist. In our minds, we are kings and queens, gods of our electrons. From every fold, we control the destiny, and our destiny is to discover, discover what is lost, discover what awaits. It is ours. Every turning corner of our future awaits for our command. So fill the table with odds and ends, select the ingredients, sit down, gaze into the small aperture, and mix. Oh Hermes of the heavens and earth, bless these sacred bindings. The manual of this brew, drift towards my mind's shore. Alchemy, if only we knew the power we wield when we open and close fist. To create is to exist."

The vibe is avant-garde jazz, funk, soul, and hip-hop. Think Sun Ra's Heliocentric Worlds (1965), Frank Zappa and the Mothers of Invention's Uncle Meat (1969), Ornette Coleman's Science Fiction (1972), or Captain Beefheart's Trout Mask Replica (1969), but instead of those collaborations, Alchemy is all Jae Ford, every instrument, every beat, every mix, everything. There's spoken word, but these tracks are mostly instrumental, many smooth and silky, others soulful and hip-hoppy, some chunky and psychedelic.

You can hear his formal classical and jazz training throughout, as well as his hip-hop influences. He was one of the producers of the popular local hip-hop collective Public Defendaz. Alchemy is a different animal—philosophical, meditative, and immersive.

According to Ford, "The album is available for purchase on Bandcamp. It's streaming on Spotify, Apple Music, YouTube, and most of the major streaming platforms. The hard copies are an underground, only-from-me kind of thing."

The packaging is super cool and worth the price of a CD, so if you've got to have a hard copy, find Ford on Facebook @jaefordbeats.

Back at the beginning of the pandemic, I told you about an emotive new single from Kelly Moreno ("Local singer-songwriter Kelly Moreno releases 'Mourning Lullaby,'" April 9, 2020), off his forthcoming full length CD, Elsinore, which is no longer "forthcoming" but has come. The song was about processing loss, something Moreno knows a bit about as a Cal Poly professor of psychology and director of training for the university's psychology master's degree program. He's also a forensic psychologist, meaning he's called on by the court system to evaluate criminal defendants' mental states.

Moreno's been a musician most of his life but set it aside for years to do the psychology thing. Then when he found he had more time, he wrote a psychological thriller novel, A Duty to Betray, which I wrote about four years ago ("Cal Poly professor Kelly Moreno offers an insider's account of psychosis in debut novel A Duty to Betray," April 27, 2016).

I guess some people need to be busy! Now his debut album is out and available under JK Moreno through Reverbnation @jkmoreno.

It's a wildly varied album that starts with a barnburner, "Get Me Back to Missoula," the album's most punchy track that sounds like an '80s Top-40 radio hit with a hooky earworm chorus.

"I'd Love to Be Wrong" sounds like something Tom Jones could have recorded. It's a cock-strut of a track: "I throw sevens and elevens on the first try. I got answers whenever Jeopardy's on. I know who will win out on the gridiron, but with you my dear, oh, I'm not so cocksure that I'm so bright."

The album has some great power-pop songs and bluesy burners but is also filled with beautiful ballads like "Mourning Lullaby" and the title track, "Elsinore," a closing track about an incestuous affair: "Full moon in the backseat/ Watchful and bright/ Her chest has freckles/ My father's wife."

After his novel and now this album, I fully expect Moreno to take up painting and create a masterpiece ... over-achiever!

Father-and-son duo The Journals, featuring patriarch John Krause and his son, Dylan, have released a nice batch of songs on Soundcloud (@the-journals-music), most recently "Another Wind Song," a gorgeous ballad with Dylan on vocals.

I think of the pair as sort of a folk/country/pop/rock act, but Dylan has also posted a hip-hop track called "New Stuff." Color me surprised! These new tracks are a real divergence for the pair. It's definitely new era in their sound—more keyboard driven than guitar.

"I write the lyrics, and Dylan writes the music and sings the songs," John explained via email. "We co-produce them. I'm excited about the possibilities with this new approach! We were booking gigs for The Journals when the virus business hit the fan. Some venues are opening up so there is still hope for this year."

It's always cool to see an old dog like John learn some new tricks, and Dylan clearly has an ear for hip-hop. Check it out!

The Clark Center and Atascadero's Saturday in the Park concert series have competing streaming shows this Saturday, Sept. 19, and both sound worthwhile.

The Clark Center presents Pop Songs of WWI by Diana Diaz from 6 to 7 p.m. on their YouTube channel (@clarkcenterperfarts) and Facebook page (@ClarkCenter). 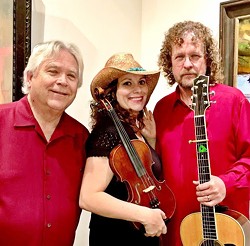 "Bring history to life for all ages!" press materials state. "Have you wondered what life was like 100 years ago when influenza swept our land? Let's talk about it. It's suddenly relevant."

Hear tracks such as "Over There," "For Me And My Gal," "K-K-K-Katy, "Pack Up Your Troubles In Your Old Kit Bag And Smile Smile Smile," and many more.

Festival Mozaic's Scott Yoo hosts Season 2 of Now Hear This, the acclaimed PBS miniseries that "merges music, storytelling, travel, and culture, as Scott chases the secret histories of some of the greatest music ever written," press materials explain. Watch it this Friday, Sept. 18, at 9 p.m. on our local PBS station, or stream it via pbs.org the day after it airs on television. Δ