SLOcals to renew their vows as UK royals say, 'I do' for the first time

Celebrate and reaffirm your love and commitment at the Renewal of Marriage Vows and Afternoon Tea with the Royal Wedding and British Cars event at St. Stephen's Episcopal Church in SLO on May 19 at 4:30 p.m. RSVP to rector@ststephensslo.org with your full names and the date of your original wedding. There will be an optional pre-event session on May 16 at 6 p.m. for anyone who wants to discuss what this will mean for them.

As Prince Harry of England and his bride-to-be Meghan Markle exchange vows on May 19, on the other side of the pond, locals in love in San Luis Obispo will renew their own marriage vows.

Rev. Ian Delinger thought the day of the royal wedding was also a perfect day for couples on the Central Coast to celebrate love at St. Stephen's Episcopal Church's Renewal of Marriage Vows and Afternoon Tea event. The local Episcopal Church is a sister church to the Church of England, and Markle, an actress best known for her role on Suits, is the first American person of color to marry into the royal family. Delinger also attended seminary in Cambridge and ministered in England for 11 years. 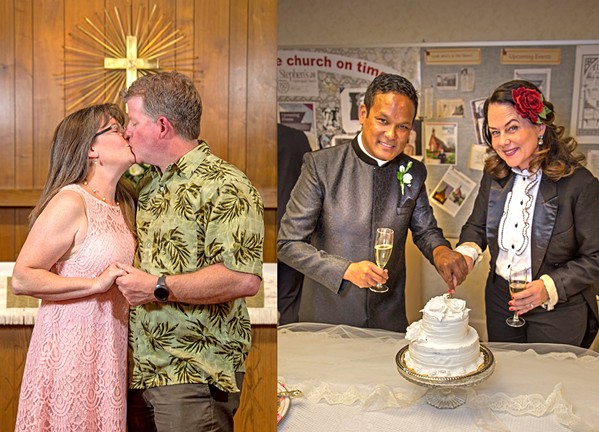 "It's supposed to be meaningful, but also joyful and fun," Delinger said of the vow renewal ceremony. "It's for anyone who feels it's the right time to renew their vows, whether it's been a year or 70 years. We just want to provide an opportunity for couples in San Luis Obispo to show their love."

The event is open to all legally married couples of all genders, Delinger said. Non-married couples are also invited to come celebrate their love, and should know that this renewal of vows is not a legal ceremony. The church hosted the event for the first time last year to celebrate its 150th anniversary.

"They might not have had a big wedding before, or they might not have been married in the church, and some people might have just come through a difficult time in their marriage," Delinger said of couples choosing to renew their vows. "The church is about celebrating those times that God is acutely with us."

After everyone has openly and publicly declared their love to their heart's content, the happy couples will enjoy tea, sparkling wine, and cake while watching the royal wedding and looking at British cars out in front of the church.

During his time in the United Kingdom, Delinger attended several garden parties at Buckingham Palace where the queen was in attendance and even enjoyed a brief conversation with her husband, Prince Phillip, the Duke of Edinburgh. Markle's wedding to Prince Harry marks the second time a divorced American woman has married into the royal family in the queen's lifetime. But it's the first union of its kind to have the blessing of the reigning monarch and parliament. As fans of Netflix's The Crown know, Queen Elizabeth II only sits on the throne today because her uncle, Edward VIII, abdicated in 1936. That came after his marriage proposal to a twice-divorced American actress was met with wild disapproval by his family, church, and country. After several of her own children have divorced, it appears that the queen's perspective on divorce has softened.

"Marriage in the royal family has changed significantly during the queen's lifetime," Delinger said. "We have Prince Harry's mother [the late Princess Diana] to thank for how rapidly the royal family has shifted to look somewhat normal. Now we [in the church] understand that divorce isn't always so cut and dried."

Markle's marriage to Prince Harry is also as close as America will ever get to having a princess of its very own. On the day of the royal wedding, Delinger predicted that the majority of people on the streets of Windsor interviewed by BBC reporters would be Americans. Despite fighting for our independence from a sovereign ruler, we still want to bask in the glow of the royals.

"I'm fascinated by the awe and history surrounding it," Delinger said. "I think the queen provides an important role in Britain." Δ

Arts Editor Ryah Cooley once had high tea at Fortnum and Mason in London, where the queen buys her tea. Send royal ravings to rcooley@newtimesslo.com.