As the senior population of SLO County continues to grow at a rapid rate, the local organizations tasked with helping them get around town are trying to keep up. 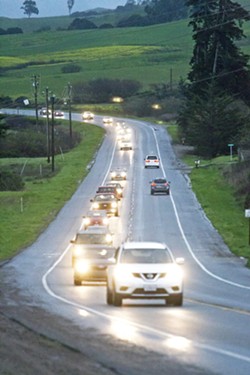 Many of the estimated 49,000 SLO County residents older than 65 need some kind of transportation, and the SLO County Council of Governments (SLOCOG) is rolling out another program to provide low-cost rides to seniors. It's called "Senior Go," and it allows SLO County seniors four round trips per month at a cost between $2.50 and $10 each way, depending on the mileage. The program will offer door-to-door and curb-to-curb service for residents 65 and older Monday through Friday.

But not everyone is supportive of the new program. A local nonprofit that has been providing senior rides in the county for years has raised concerns, claiming that it was passed up for a contract to operate Senior Go, which will deprive it of the funding it uses to provide rides for the elderly. It also noted that SLOCOG is giving the job to a company located outside of the county. SLOCOG, however, believes that the new program and contractor will provide more accountability for those taxpayer funds.

Since 2006, local nonprofit transportation service Ride-On has been providing senior transportation and receiving taxpayer funds in the form of a block grant through SLOCOG. But in 2017, SLOCOG's board directed its staff to change course and move forward with obtaining a formal contract for a senior transportation program, creating a request for proposals and putting the contract out to bid. SLOCOG received bids from two agencies, Ride-On Transportation and Ventura Transit System Inc. (VTS), a company based in Camarillo.

According to a SLOCOG staff report, a four-person selection committee reviewed the two bids and recommended choosing VTS for the two-year, $250,000 per year contract.

"It was a process that was open and transparent," said Pete Rodgers, SLOCOG deputy director. "VTS was the superior responder to the RFP."

But Ride-On Executive Director Mark Shaffer was critical of the bid award. He said that Ride-On was the better choice. Not only is Ride-On local, but Shaffer also said that his organization submitted a bid that was $89,000 lower than VTS.

"They have very little experience in the county," he said. "On paper they may look great, but that's just on paper."

Shaffer said that Ride-On would need to find additional funding to replace the $250,000 that SLOCOG would divert to VTS for the Senior Go Program.

In April, Ride-On officially protested the selection committee's decision to recommend VTS, but SLOCOG's executive director upheld the decision. SLOCOG has pushed back against several of Ride-On's criticisms. The selection criteria were also based on multiple factors besides price, according to a SLOCOG staff report. While VTS is headquartered in Camarillo, it has a satellite office in SLO and has been operating in the county for 10 years, the report also stated.

Rodgers said that moving to a contract would also provide more financial transparency for the program. The proposed contract would require VTS to provide detailed accounting of how the $250,000 is spent, data on rides and services it provides with that money through the program, and information that is accessible to SLOCOG and the taxpaying public. The previous arrangement with Ride-On wasn't contract based, and past attempts to broker a memorandum of agreement between it and SLOCOG were unsuccessful, according to Rodgers.

"We would rather go with this service-level contract so we have better public accountability and transparency," he said.

SLOCOG's executive board unanimously voted to award the contract to VTS at its June 6 meeting. Shaffer told New Times that Ride-On would still continue to offer its own ride services for seniors.

"The upside is that there will be more shuttles for seniors who need rides," he said.

The need for transportation for the county's seniors is only going to increase in the coming years, as their numbers are expected to reach record highs. According to the California State Plan on Aging, the number of SLO County residents older than 65 is expected reach more than 93,300 by 2030. Δ