SLOMA exhibit features work of photographers from their journeys through Vietnam

Photo Courtesy Of Peggy Jansson REFLECTIONS Peggy Jansson's Bac Ha Market is a portrait of a Vietnamese woman dressed in traditional clothing reflected in the mirror on her motor bike.

Visions of Vietnam: A Photographic Journey is on display at the SLO Museum of Art through Feb. 2, 2020. Visit sloma.org for more information.

Peggy Jansson, a San Luis Obispo local, lived through the Vietnam War era, during which her husband was deployed on two Western Pacific tours in the U.S. Navy. Having been a passionate photographer ever since playing around in the Cuesta College dark room in 1979, Jansson found herself with the opportunity to participate in a photography workshop in Vietnam last year.

Given her husband's experience in Vietnam—a war that was famously brutal for those fighting on both sides and sparked major protests—Jansson told New Times she "had several people asking, 'Why do you want to go there?'"

But driven by the chance to see "what's outside of our country," including Vietnam's beautiful landscapes, Jansson packed her bags and embarked on the journey with several other photographers. The pictures that Jansson, Cheryl Strahl, and Sylvia Sanchez captured on that 2018 trip, along with photos by Ronnie Goyette taken on a 2017 trip, are featured in an exhibit titled Visions of Vietnam: A Photographic Journey. The exhibit is currently on display at the San Luis Obispo Museum of Art (SLOMA).

Although she went in expecting to focus on the lush, verdant landscapes of Vietnam, Jansson found herself instead taking pictures of the people. Every photo she ended up submitting to the SLOMA exhibit is a portrait. Two that Jansson said she was particularly proud of came from a weekly market that the photographers visited on their trip.

"[The photos] were both taken at the Bac Ha Market," Jansson said. "It's 5 miles approximately from the Chinese border, so we were really up in the mountains. The villagers and people come from all over the place just to attend this market on Sunday. They sell everything—their wares and food, oxen, sundries, shovels, you name it."

One photo titled Bac Ha Market Village features a stunningly focused image of a Vietnamese woman at the market, dressed in bright red and beaded attire. But rather than a typical portrait, the woman's profile is captured in the reflection of her motorbike mirror. One of the most common forms of transportation in Vietnam, the modern motorbike, contrasts seamlessly with the traditional clothes that the mirror-reflected woman dons. Strahl said that from her observations, these juxtaposing elements exist all over Vietnam.

"Vietnam is such a country of contrast," Strahl said.

"We started out in Hanoi, which is probably one of the busiest cities in Vietnam," she continued. "All the thousands of motor scooters: Just busy, busy, busy. And then we go up to the highlands in the mountains near the China border, and we find these people, and they're just the opposite. Life is hard for them, of course, but it's still a very different way of life."

Also inspired by the people of Vietnam, Strahl said that her favorite photo that she submitted for the exhibit is a portrait of an elderly woman titled Thoughtful in Hau Thao. The woman in the photo is wearing a dark-colored jacket, which blends in with the background behind her. Underneath, a bright fuchsia shirt ties in with the woman's bright green, purple, and blue head scarf, creating a cohesive composition for the portrait. Intricate metal earrings hang from her drooping earlobes as she looks off into the distance. 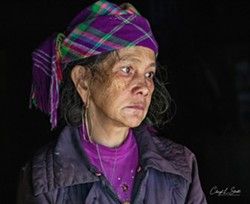 "She had a girl who was hers and then she had a boy, too, who was her grandson," Strahl said of the woman in the photo. "She was taking care of both children because her daughter died in childbirth, and her son-in-law joined the service and hasn't been seen since."

Strahl said that other Vietnamese women she met during her trip often held breadwinning positions in their households.

"The women are mostly the ones who cater to tourism right now, by making their textiles to sell to tourists and giving tours," she explained. "Men have kind of lost their head-of-the-household status, so they are kind of taking care of the children now. ... It's just a turnabout of their whole roles in life, and it's working for them."

The trip to Vietnam allowed all the photographers featured in the exhibit to not only bring home portraits, but also get to know the people they were photographing. One interaction that Jansson had with a Vietnamese man made a particularly lasting impact on her.

"We visited an old folks' home, and I came across one gentleman that was there that served in the Vietnam War," she recalled.

Jansson approached the man and told him that her husband had served in the war, too. She wasn't sure how the man might react.

"He had no animosity against me or my family and was very welcoming, actually," Jansson said.

Strahl echoed this sentiment, recalling that it was the immediate kindness she was met with that made photographing the people of Vietnam so fulfilling.