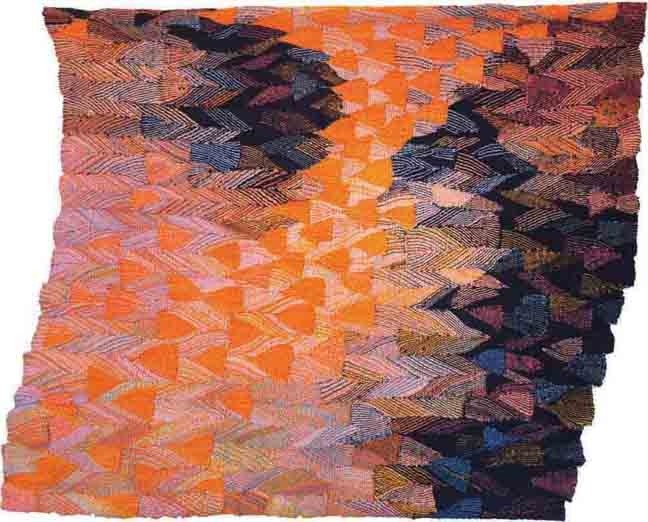 It’s always uplifting to encounter an artist who’s genuinely immersed in her work, but it’s an even more enriching experience to have one invite you in on the joy of creating with her.

This is what makes A Weaverly Path, the documentary of artist Silvia Heyden’s tapestries—screening Nov. 18 at 7 p.m. at the SLO Museum of Art—so wonderful. Not only is it a true inside look at the creative process, but it serves as a reminder of the joy a committed artist can get from dedicating her life to perfecting her craft.

Born in Switzerland and educated in the Bauhaus School of Design, Heyden spent years studying under Swiss expressionist painter and designer Johannes Itten. Her teacher Elsie Giauque told her that working with tapestry would be “tough.”

“She said if you want to do something original, it’s going to take a lifetime,” Heyden says, “and it sure did.”

Directed, shot, and edited by Kenny Dalsheimer, A Weaverly Path focuses on Heyden’s series of tapestries depicting the Eno River in Durham, N.C., her adopted home. The film is done with very little intrusion by the interviewer. With such an appealing subject, it was a wise choice. Though we meet Heyden’s husband Siegfried and see glimpses of her children, we spend most of the film listening to the artist, who shares inspirations for her work, the history behind her training, and the fundamentals of creating on a loom.

The tapestries are luminous with color and movement. Though Heyden’s muse for years has been the river, she doesn’t mean to represent it so much as to evoke it.

“I don’t do river pictures,” she says. “I want tapestries which flow, which have their own landscapes.”

With no hint of irony, Heyden uses the word “weaverly” in sentences as though it were a universally accepted adjective, as in (holding up several skeins of yarn): “I have these open colors, vibrating. That is weaverly.”

A donation of $7 ($5 for museum members) is suggested. SLOMA is at 1010 Broad St. downtown; see sloma.org for details.

For more on the film, visit aweaverlypath.com.