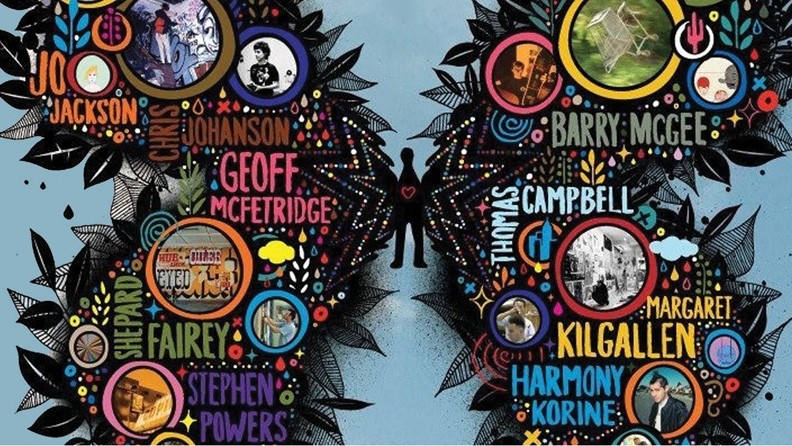 Make something from nothing” is the tagline of Beautiful Losers, the 2008 documentary by Aaron Rose and Joshua Leonard. It’s oddly fitting that Rose and Leonard’s film would have an imperative as its slogan: Beautiful Losers follows a loose movement of DIY artists in the ’90s who inadvertently affected the parallel worlds of art, design, and yes, advertising. It shouldn’t come as a surprise that marketing should look to youth culture for inspiration. What’s interesting about these artists’ stories is how swiftly that absorption seemed to happen; how the work of onetime outsiders was suddenly (try to say this word without sounding hipster, I dare you!) mainstream.

Beautiful Losers, which screens at the San Luis Obispo Museum of Art on Monday, Aug. 19, profiles artists such as Ed Templeton, Chris Johanson, Jo Jackson, Shepard Fairey, Margaret Kilgallen, Barry McGee, Mike Mills, Harmony Korine, Stephen Powers, Mark Gonzales, and Geoff McFetridge. Many of these artists were professed outsiders—skaters, punks, or comic book nerds—by the time they reached high school. As teenagers, it seems, most were making art, if only as an extension of their chosen outsider identity.

The story of their genesis begins at Alleged, a storefront gallery space in New York operated by Rose. In the early days, the gallery served mainly as a party space for “dumb, bored kids,” as Mike Mills puts it. From the way he and others explain it in interviews, there was little money in the operation, but artists made things and put them on the walls, and other artists reacted encouragingly, and a scene of skate- and graffiti-inspired art began to flourish. But it wasn’t until a rather half-assed (Rose admits) show of paintings on skateboards struck a cultural nerve, garnering press attention and the interest of a Hollywood gallery, that this group of bored kids began to resemble a movement.

Directors Rose and Leonard let their story unfold entirely through interviews with the movement’s colorful characters, and this choice serves the film well. There’s no narration or onscreen verbiage to offer the official record, which might have reduced these wonderful interviews to quirky side commentary. Instead, all we have to go on is a series of highly opinionated, poignant, funny, meandering, and above all, subjective recollections. Barry McGee is sullen, idly toying with odds and ends. Mills, writer-director of the indie film Beginners and a number of commercials and music videos, recalls his teenaged punk rock days and the sting of heartbreak. Harmony Korine takes us to the park he used to hang out in, telling a gruesome story of his high school friend’s beheading—he’d messed with the wrong people, apparently. It really changed the whole scene, Korine recalls, as children play in the background. (“Hey, how’s it going?” Korine calls out to them. “You know, they found my friend Samuel’s head right there, in ’86.” “Cool!” shrieks a little girl.)

Beautiful Losers also incorporates archival footage and clips from Mills’ and Korine’s early films, which are experimental and awesome in their yearning, angst-ridden way, and bring to the documentary a deeper sense of time and place.

A tragedy within the group, revealed late in the film, comes as a shock, and here the film slows its pace, as if to absorb it. Other thematic transitions are signaled by frenetic montages of artwork. “Look at all this stuff!” it seems to say, mimicking, perhaps, the sensory assault of the advertising industry.

Advertising seems to divide the group into two camps. Mills, Templeton, and McFetridge seem happy to do commercial work as long as they can exert creative control, and as long as the products they’re hawking are reasonably awesome. Others shake their heads at the idea of “selling out,” although to their credit, no one actually uses that term.

The exhibit that gave the group its name was more of a retrospective, opening in 2005 and traveling for another four years. By the time they earned the label “Beautiful Losers,” many of the artists profiled were already well-established professionals, and you could say the “scene” was “dead” (fortunately, no one says that either).

Today, the art of the Losers has become such a part of the landscape of advertising and design that it’s nearly invisible. Rose and Leonard’s film is a reminder of its scrappy, socially awkward beginnings.