They all huddled together, afraid and uncertain of why the men were trying to hurt them.

The youngest of the three rhinoceroses cried out, alerting the guards to the imminent danger. The sound of gunshots and screams filled the air. Then silence. The three and last of the northern white rhinoceroses collectively exhaled, but still stayed put in their tight, small circle. It felt safer that way.

Foiling poaching attempts is all just part of the job for the people working to protect Fatu, Najin, and Sudan, the last of the northern white rhinoceroses left on Earth. The northern white rhino is a subspecies of rhinoceros in Africa that is woefully close to extinction. There used to be a fourth of their kind, until a 41-year-old female named Nola was euthanized at the San Diego Zoo in November after a series of illnesses.

Now, no northern white rhinos can be found roaming wild and free. Fatu, Najin, and Sundan all live at the Ol Pejeta Conservancy in Kenya, where they are kept safe from poachers with armed security 24/7. There is reason to put up guards around the clock for three rhinoceroses—roughly 1,215 were killed by poachers in South Africa in 2014, according to the nonprofit group Save The Rhino. The rhinoceros is hunted for its horn and is in high demand in Asian countries, particularly Vietnam. The horn is thought to have uses in traditional Chinese medicine, but it’s also seen as a status symbol.

The plight of the northern white rhinoceros struck a chord with Los Osos artist Patrick Mehaffy. He decided to use its story and the upcoming Central Coast Sculptors Group’s show at the McMeen Gallery at the San Luis Obispo Museum of Art to spread the word about the dwindling northern white rhinoceros population, while also challenging the physical limitations of the gallery by building a life-sized sculpture of a rhinoceros. The piece is fittingly dubbed The Rhinoceros Project.

“What I thought was we should do something that really confounds and confronts the limitations of the space and do something that’s just impossibly big,” Mehaffy said. “I imagine the first thought will be, ‘How did they get it into the room?’ Since it literally can’t fit through the door. Then I hope there’s something they might want to do, like give to a conservation effort.”

While the gallery is only 12 feet by 27 feet, the rhinoceros sculpture being built by 12 artists from the Central Coast Sculptors Group will be 12 feet long from horn to tail and about 6 feet tall. It’s literally too big to fit into the doorway and will be built in pieces and assembled in the gallery before the big reveal. A real, fully grown white rhinoceros weighs about 5,000 pounds, but for the sake of the artists, this one will be much lighter. 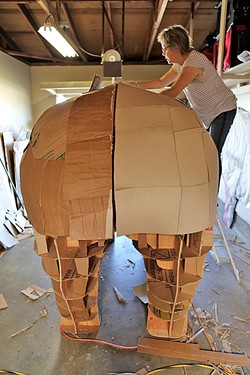 Right now The Rhinoceros Project is still a work in progress. He is made up of mostly cardboard and some plywood along with two sparkly glass horns and intricate dark glass eyes. Later, he will also get a spunky little tail. To finish, the rhinoceros will be all wrapped up like a mummy in cloth that has been soaked in black tea to give him that ancient look.

While three of his real-life counterparts remain, the future of the northern white rhinoceros as a species looks grim.

“Unless they figure out some sort of biomedical miracle, the northern white rhinoceros will likely be extinct in our lifetime,” Mehaffy said.

Neither Fatu nor Najin, the two females in Kenya, is capable of natural reproduction, and Sudan, the sole male, has a low sperm count. Still there is a ray of hope: artificially assisted reproduction remains a possibility. In July, the Ol Pejeta Conservancy created a GoFundMe campaign called Make A Rhino, with a goal of raising $1 million in order to try using in vitro and stem cell technologies to continue the line of the northern white rhinoceros.

The rhinoceros, a symbol of power and strength, is juxtaposed by its current vulnerability as it continues to fight for its very existence.

“We want to raise awareness in some way,” Mehaffy said. “We’re trying to represent the essence of the rhinoceros. We hope it has that quality of mummified Egyptian animals where it represents the animal and also has that sense of power.”