Things are looking topsy-turvy over at the San Luis Obispo Museum of Art. There, you can see buildings swerve and mountains bend like a piece of taffy in the heat. You can witness a tree float upside down and a clock behind the veil of a glass of water. No, this isn’t the work of some crafty magician, some David Blaine type that’s come to mess with the minds of the public. These are only a sample of the many photographs on display as part of SLOMA’s new exhibit, Reflections.

Every other year, the Central Coast Photographic Society puts out a call to artists for images that “showcase both traditional and cutting edge digital imaging techniques exploring the literal and symbolic expressions of reflections.” All right. Easy enough. Do some staged mirror shots, make it black and white, and be done with it. This is the kind of prompt that’s simple enough for high schoolers in beginning photography. However, in its simplicity, the theme offers vast room for interpretation and a variety of expression—both of which can be seen in the 56 images chosen for the show. 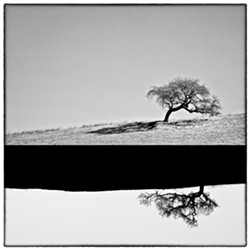 “They don’t feel like the same pictures,” said Leigh Gleason, curator of collections at the California Museum of Photography and the exhibit’s juror. “Part of why they all placed was that they were unique in what they were trying to do. The Best in Show, this beautiful beach landscape. It’s a picture I wouldn’t mind having on my wall. It encapsulated the idea of reflections, the theme, and encapsulated great photography.”

Melvin Dorin, a local photographer and Cambria resident, took the Best in Show photograph that Gleason described. Titled Sunset, it features a luminous portrait of Moonstone Beach at the golden hour. The glossy sheen of the beach echos the sinuous cloud lines above. It’s a pristine image that appears more like abstract painting than photography

“The image Sunset was the result of many trips to Moonstone Beach during the summer months,” Dorin told New Times. “As with all things in nature, it’s basically a crapshoot every time you journey out to a location, so you just keep going and hope that one day the stars come together and spell ‘yes.’ This particular evening, the sunset was just different from most others I have witnessed over the years. The colors were spectacular, but more than that, the clouds assumed a feathery structure that gave an overall impression of depth and drama to the scene.”

Like most photographers, Dorin cut his teeth on 35mm film. He bought a Kodak Pony 828 for $32 as a kid. From there, he began taking candids, and eventually took photo classes from Ray McSavaney, John Sexton, and Marion Patterson—the latter two of whom worked with Ansel Adams. Only recently has Dorin switched over to digital. For Sunset, he used a Nikon D800E and, despite the rich hues of the titular subject, chose to change the image to black and white.

“I photographed the scene in color, but I knew that the cloud structure and the symmetry of the reflections on the wet beach were really what created the drama, not the color,” Dorin noted. “There are probably 200 billion sunset photographs, but I wanted people to see sunsets in a different way, without the color.”

James Crawford took a similar approach. In his image, Yin Yang Gone Wrong, which garnered third place, two trees stand atop each other in vertical opposite. The top half is in gray scale; the bottom is stark, black-and-white contrast. This could be just another desolate image of a single tree paired with its reverse. But it’s not. There’s more trickery afoot.

One day, Crawford and his friend Bob Canepa, whose work also features in Reflections, were driving up Foxen Canyon Road after a trip to the Walt Disney Concert Hall. They stopped along the way, photographing some of the many oak trees that line the road.

“At one point,” Crawford recalled. “I told him [Bob], I said, ‘I’m photographing trees the same old way.’ I said, ‘I feel like I’m in a rut. I keep photographing the tree on the right.’ When I got home, the light bulb went on. I’ll take another one of the trees and just kind of reverse it, and that’s what happened.”

The image is not a true reflection. In a slightly subversive maneuver, Crawford took two different trees and digitally altered them to look like mirrored copies—one light and one dark. Like Dorin’s image, the effect renders something familiar, almost clichéd in photography (a sunset, a tree, etc.), in a different light.

The same could be said for the majority of the 56 images Gleason chose for the exhibit. From flamingos to hot air balloons to Steven Boothe’s imaginative display of ripples bordered by Care Bear stickers, Reflections goes beyond what the theme implies. These are hardly copies. They’re fresh, innovative, and reflect the broad versatility that photography can achieve.

Now Jessica Peña has the song “Reflection” from Disney’s Mulan stuck in her head. Sing along at jpena@newtimesslo.com.