For more than 50 years, Arthur Tress has been intriguing and captivating audiences with his photography. His latest exhibit, About Morro Rock: 100 Views, is being shown at the San Luis Obispo Museum of Art, and what intrigues about this show is the fact that you can see some aspect of Morro Rock in every shot. 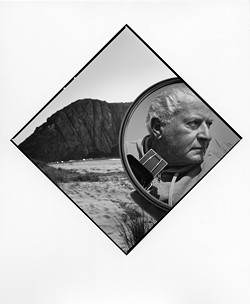 As the title suggests, the exhibit boasts exactly 100 images of Morro Rock. They’re seen in small clusters around the museum. Some of the photos require a second glance; some tell stories of their own. It almost works like a game of “I Spy.” This dynamic quality is what prompted Tress to start shooting the rock in the first place.

Early on, he looked at the rock and “noticed it as a potentially  different subject.”

“I wanted to do the photo differently,” he told New Times. “The daily life of the local community is the foreground of the photos. It has a presence, and there’s something different going on every day.”

About two to three times per day for the past six years, Tress has been photographing the rock and its surrounding scenery. In that time, he took about 25,000 images of the local flora, fauna, people, and life that surrounds Morro Bay’s most famous landmark. And despite being shot in relatively the same location, the photos that Tress has shot highlight the vastness of the community.

“I had two shows at the museum over the last 20 years,” Tress said. “I thought that it was really the first time I’d photographed the local community.” 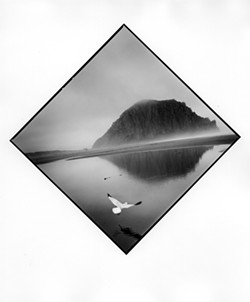 Indeed, the exhibit offers diverse and mesmerizing glimpses of a small town rich with life. Many of the pictures have an eerily beautiful feel to them. One shows Morro Rock through a candy dish. Another features a small girl floating around in a giant plastic bubble with the rock’s shadow peeking out from behind. With such a simple premise, the photos exhibit a surprising amount of depth and detail. They’re tales of a town told through snapshots.

Regarding one of his photographs (a funny and bizarre image that features a fish fit into the mouth of a fish figurine), Tress recalled one story in particular.

“There’s a little fish restaurant on the pier,” he said. “They were selling fish inside the restaurant, and I asked if I could borrow it to photograph with Morro Rock in the background.”

Stories are not unusual to find in Tress’ work. Born in Brooklyn in 1940, he got interested in photography as a teenager when his sister gave him a camera. Since then, he’s become internationally renowned for imagery that portrays a strong sense of community and character. Some of his earliest images explored Coney Island’s old and abandoned amusement parks, shots of 1960s counterculture in San Francisco, eager fans on the sidelines of The Beatles’ 1964 tour, and the Civil Rights Movement. They are photos that focus on people primarily. But with this exhibit, Tress has ventured into the world of landscape photography. 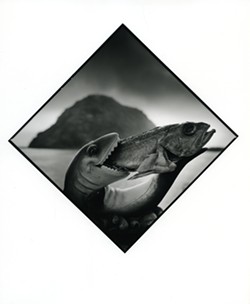 He’s ventured further out of his comfort zone by using a different format. For each shot, Tress would turn his Hasselblad camera at a 45-degree angle.

“[It] brought a new dynamic,” he said. “[And it was] appropriate to Morro Rock.”

The rest of the process, though seemingly tedious at six years in the making, was much the same as it always is with Tress. He creates photos based on one rule: the less equipment, the better. He uses simplicity to his advantage and minimalism as his tool.

Though simple in technique, the resultant images are nothing short of complex and beautiful. In 100 frames, you see the ordinary—a fisherman, a chain-link fence, the sand, the sky—become extraordinary. You see Morro Rock as more than a landscape. You see it as a series of intricate places that are seen but rarely explored.

“Being a productive photographer is a way of life,” Tress said. “Photography gives me an excuse to get into these new worlds that are right under our feet.”

Intern Morgan Chadwell has seen 100 shades of Morro Rock, and you should too. You contact Morgan via Arts Editor Jessica Peña at jpena@newtimesslo.com.