A San Luis Obispo police officer who shot and killed a dog in its owners' driveway on Sept. 26 has been taken off his patrol beat while the department further investigates the incident, SLOPD Chief Deanna Cantrell said on Oct. 2.

SLOPD Officer Joshua Walsh fatally shot Bubbs, a 7-year-old pit bull-boxer mix, during an encounter that the dog's owners have decried as "avoidable," "unnecessary," and "dangerous."

Walsh shot Bubbs twice in front of his owners Nick Regalia and Riley Manford's house—reportedly fearing for his safety as police responded to a call about a possible burglary. 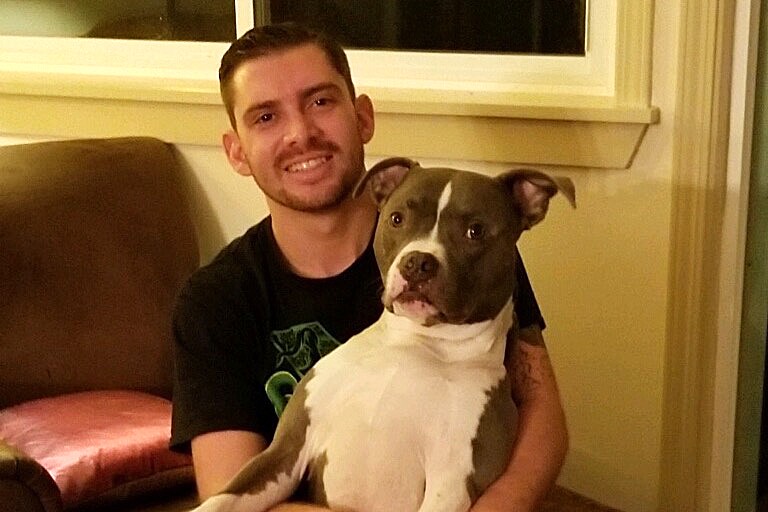 Bubbs was rushed into emergency surgery, but hours later succumbed to the gunshot wounds.

In an emailed statement to New Times on Oct. 2, Cantrell called the incident "a tragic situation" and said she "understands and shares" the community's concerns. SLOPD is reviewing the shooting, which was recorded on Walsh's body camera, and Cantrell will determine if Walsh "acted appropriately under the law and totality of the circumstances," she said.

"We take every discharge of a firearm seriously, therefore, the officer has been placed on administrative reassignment while this incident is under investigation," Cantrell said. "This was a tragic situation for the family and our officers, and we are sorry for the family's loss."

Cantrell noted that state law and SLOPD policy allows officers to use "objectively reasonable force" when necessary to protect themselves, and added that the investigation and any discipline handed out as a result will be confidential.

Regalia and Manford claim that Walsh's use of force in the situation was unnecessary and unreasonable. They plan to file a lawsuit against the city.

The couple was home on Sept. 26 around 11 a.m. when two SLOPD officers came up their driveway toward the back-unit house on the 600 block of Santa Rosa Street.

A neighbor reportedly had called in a potential burglary at the home—a false alarm, according to Regalia. He and Manford had been fixing a broken window at the house, which triggered the call.

"A window was broken. My girlfriend and I were fixing the outside window," he said.

As the officers approached the house, Bubbs, who was outside untethered, started barking at them. Bubbs spent many of his days out on the house's front patio, Regalia said, and he had no history of violence.

"He just chills in the yard all day. Everybody knows him," Regalia said.

While one of the officers appeared unfazed by Bubbs, Walsh drew his gun, according to Regalia. As the dog approached the officers, Walsh ordered Manford to gain control of the dog.

"He's pointing the gun at the dog telling her to go into the line of fire and grab the dog, so she was hesitant," Regalia said.

When Bubbs came a few feet from Walsh, he fired three shots, hitting the dog with two. Bubbs ran back into the house, bleeding, and Regalia said he wrapped him in a blanket and rushed him to an animal hospital.

After several hours (and $8,000 worth) of emergency surgery, Bubbs was put down.

Regalia and Manford believe that the SLOPD's actions in the moment were unjustified and irresponsible. Regalia said he's pursuing litigation against the city because "I don't want this to happen to someone else."

"It doesn't bring my dog back," he said.

In the wake of the shooting, a GoFundMe page launched to help the couple pay for Bubbs' emergency vet bills. A recently formed change.org petition also calls for Walsh's termination. It had 543 signatures at press time.

"It's no wonder people are scared of cops," Regalia said. "It was just totally avoidable and excessive. To be that scared of dogs? Hit him with your baton or mace him or something.

"The police force is just so quick to pull out their guns," he continued. "There are 10 people living here. It's dangerous as hell. Something's got to change." Δ