Best time of the year

SLOQueerdos' Holiday Drag Show will be on Dec. 17 starting at 7 p.m. at SLO Brew. The event is for those 21 and older. Tickets are $10 each. Visit SLOQueerdos on Facebook for more information.

When their rent in San Francisco unexpectedly doubled, Daniel Gomez and Frank Dominguez instantly knew that they wanted to relocate to the Central Coast.

Dominguez's family is from the area, and the couple loved how beautiful it was here. While the LGBT scene is smaller in SLO than the Bay Area, Gomez and Dominguez didn't feel there was a lack of queer people here, but something seemed like it was off.

"We noticed there were a lot of queer people in the area, but no one would ever say hi to each other or anything like that," Gomez said.

One night while out at Metro Brew downtown, Dominguez noticed a few other gay couples by the bar, but everyone was sitting opposite from one another, so he took it upon himself to walk up and say, "Hey, are you gay?"

Knowing this kind of direct approach might not be appealing to all, the couple asked themselves, "What can we do to bring everyone together?"

Since Gomez does drag, a friend suggested they put together a drag show. They started small and planned a party for the queer community at Metro Brew on National Coming Out Day last year in October. About 30 people showed up, and then-mayoral candidate Heidi Harmon spoke. Fast forward about a year and the pair is now known as the SLOQueerdos, and they put on a drag show at SLO Brew about every six weeks with an average of 400 people attending. The shows have gotten even those who aren't a part of the LGBT community interested.

"It's been really great to see these random straight guys show up in a dress. It's like fuck yeah, thank you," Gomez said. 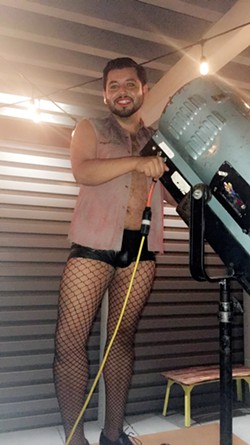 This October, after a year of putting on local events, they set their sights a little higher and put on a Rocky Horror Picture Show event at SLO Brew's The Rock, where live performers sang the musical numbers while the movie played on a big screen.

"Rocky Horror has been my love for my whole life, so it was nice to be able to do it," said Gomez, who played the part of Columbia.

At the Rocky Horror Picture show event, Gomez said it was about a 50/50 split between LGBT and straight attendees. And as far as SLOQueerdos is concerned, that's a good thing.

"It's nice to create a space that isn't even gay or straight, but a space in which all are welcome," Gomez said. "Our big goal is just to create shared space."

That's why going forward Dominguez and Gomez want to expand to do even more than their signature drag shows. They're thinking more movie nights and even game nights will be up on their calendar in the coming months, along with a daytime drag party one fine Sunday.

Arts Editor Ryah Cooley is always down for a round of Jenga or Cards Against Humanity at rcooley@newtimesslo.com.