It all started with one spontaneous night last fall, when local roller skating enthusiast and instructor Shauna "Dottie Mae" Gustuson went to Santa Rosa Park in San Luis Obispo for a casual night skate with a friend.

As she held a Bluetooth speaker playing some tunes, Gustuson noticed as she rolled around the rink that others in the park had started skating closer and closer to her.

"More people started to show up. So we skated faster [to keep distance]," Gustuson said. "Then, somebody was like, 'Hey, quit skating so fast. We need to hear the music.'" 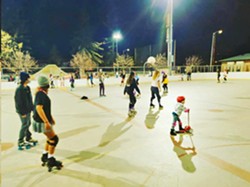 Gustuson was inspired by the experience, and it sparked an idea. Before their next skate, Gustuson reached out to local DJ Brotha C to ask if he wouldn't mind playing music during it.

Add in some colorful party lights—and more friends and community members who joined—and a new movement, the SLORoll Community Initiative, was born.

"More and more people came, and that's exactly how it developed," Gustuson said. "The most unique thing about it is the way it's grown in such an organic way. We were giving the people what they wanted and developing something that filled the need."

Fast-forward to today, and SLORoll is now a registered nonprofit. Gustuson and SLORoll's leadership work with cities throughout SLO County to find space to host their monthly "community skates," with the next one scheduled for July 10 at Hero Park in Grover Beach. The skates are free and open to all ages and wheel types.

Back when SLORoll was first getting started, Gustuson said she could sense the joy and relief that it brought to the people participating. The skates triggered a nostalgia and appreciation for disco roller rinks of the past, which had important cultural significance, especially in Black culture. Roller skating played an often-unheralded role in the Civil Rights movement, as activists staged sit-ins at segregated roller rinks throughout the country.

Gustuson pointed out that SLORoll came about last year during another tumultuous time, in the midst of the Black Lives Matters movement, the COVID-19 pandemic, and the spike in hate crimes against Asian Americans and Pacific Islanders. The skates became a needed space for locals to escape, express, and belong.

"The way the world was at the time ... the tenseness of the world, the weight of the world on people's shoulders, they'd come out to skate and they were smiling," Gustuson said. "People were sending me personal DMs [direct messages] saying, 'Thank you so much for inviting us out. The kids finally had a chance to get out. It was outdoors. Thank you for doing this.'"

Finding physical spaces to skate hasn't been an easy task for SLORoll. Aside from the fact that SLO County does not have an indoor skating rink, there are also few "legal" options for outdoor skating locally.

Darryl "Mr. Clutch" Jackson, the public relations chair for SLORoll, said that between SLO's lack of skating rinks and the various local ordinances that regulate skating, the activity seems almost outlawed. Police have been called on past SLORoll skates, and the organization got an icy reception from some cities' officials.

"There's this big stigma that got lumped in," Jackson said. "It's hard to not talk about. ... We really want to push a positive message, but there are some obstacles. We have learned a lot."

Jackson, who grew up going to roller rinks and now has his kids hooked on the sport, said SLORoll has made strides over the past several months gaining the community's support. He said Grover Beach, Arroyo Grande, and Atascadero have been particularly supportive.

The organization's ultimate goal, he said, is to help establish more roller rinks throughout SLO County—indoors and outdoors.

"We're just a little nonprofit trying to do something big," Jackson said.

For Gustuson, who is also a skate instructor with Central Coast Roller Derby, SLORoll is all about promoting, honoring, and celebrating authentic skate culture—and reaping in its benefits.

"It's networking, it's therapy, it's stuff for the kids to do," she said. "When you go there, everyone knows each other. Everyone knows whose birthday it was. It's a community thing. We're trying to really bring that to our area and unify the community through that."

El Camino Homeless Organization (ECHO) recently earned recognition from state Sen. John Laird (D-Santa Cruz) as the 2021 Nonprofit of the Year for District 17, the state senate district that spans four counties. In the past year, ECHO expanded to serve Paso Robles, where it opened the city's first shelter for the unhoused, and now operates three shelters in North County. "We are deeply humbled to be recognized," CEO Wendy Lewis said in a press release. Δ