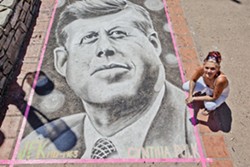 When Shelley Triggs first moved to the Central Coast, she spent an entire day with her young son painting a 2-foot by 2-foot square in the parking lot of the SLO Historical Center. It’s a scene that many families and individuals, both local and visiting, have come to expect from downtown SLO. Every year, for two days, the pavements of the Mission Plaza and its surrounding streets transform into a colorful canvas of diverse, vibrant, and, often master class pieces of art. This year, however, the festival itself has undergone its own kind of transformation with a name change to Via dei Colori—Italian for “streets of color.”

For the past 23 years, SLO’s famous street painting festival has been known as I Madonnari. Named after the original street painting fair founded in Italy around the sixteenth century, the event has only increased in popularity since it first came to the United States when Kurt Wenner and Manfred Stader introduced the festival at Old Mission Santa Barbara in the 1980s. Soon, I Madonnari made its way up to SLO, and since then, the two festivals have been partnered with the Children’s Creative Project, a Santa Barbara-based non-profit organization that benefits arts education. Now, the two have separated ways and the festival formerly known as I Madonnari in SLO has partnered with the city’s own Children’s Museum.

“Santa Barbara is doing their own festival, and the name was associated with Santa Barbara,” Heidi Gibson, one of the event's organizers at the American Institute of Architects Central Coast Chapter (AIACC), said. “So, we came up with our own name. We’re extending the festival down to Nipomo Street, and they’re located right there. The Children’s Museum is that base. It’s a great symbiotic relationship, and there’s going to be bigger and better children’s activities.” 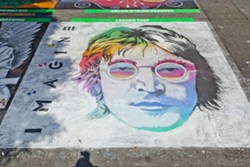 Alongside some of these activities, which include a snow cone vendor and food trucks from local restaurants like High Street Deli, this new partnership represents a step toward a larger expansion for the event. They have a new partner with the Children’s Museum, a new website, and will be offering an art gallery at the Mission Plaza, near Luna Red, where visitors can purchase original works from some of the participating artists. And next year, they hope to include local breweries and wine tasting.

“It’s a benefit for us,” Micah Smith, the public relations organizer for the AIACC, said. “We’ll be able to take the gallery fee that an artist would normally pay, and the artist gets a physical piece of the sale, and has the opportunity to connect with the people who come out there to see the street painting and get a little bit of public outreach. They’re excited.”

And, it’s the art that is central here. In addition to the event’s focus on arts education, the festival boasts between 80 and 100 sponsored squares, separate, smaller squares for children, and a featured artist. This year, that featured artist will be Cynthia Polk, who has been an avid participant of the former I Madonnari since it began in SLO. 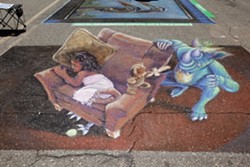 “It has always been what I look forward to every year,” Polk said over email. “On my hands and knees, and covered in chalk, and getting to talk to with and be apart of the community I love. I have always loved art, it is the best outlet for myself and for others, the greatest joy I get is seeing younger children become inspired and want to produce something of their own.”

This is why the artists, the organizers, and the visitors, both near and far, keep coming back. This is why the organizers house some of the artists at their homes, and spend months acquiring permits, planning activities, soliciting donations, and calling artists from all over the country. They love the art, but they also enjoy the community feeling it fosters, with its focus on family and child participation. This is why, a year after painting a small square with her 5-year-old son, Triggs became the event’s coordinator, with her son serving as her associate, the go-to chalk coordinator.

“It’s really a place, a sense of community that the artists have,” Triggs said. “There’s a real tight group of artists that return year after year. They all want to be next to each other, and they go through all kinds of challenges. Sometimes, it’s raining, so they will return. And it’s exciting to see the creative process happen, the alchemy and the transformation from what is first concrete.”

People enjoy the art so much that they wish the squares were left up for longer. In fact, more recently, the festival has come under slight criticism for having the paintings washed away almost as soon as they are finished. Triggs even recalls one street sweeper who was so touched by the artwork, he started crying and couldn’t clean it away. The AIACC has limited control over the plaza, as it falls under the jurisdiction of the city’s Department of Public Safety. However, while some wish the Mission Plaza could always be a dazzling array of Monet re-creations, impressive 3-D scenes, or charming kids’ pictures, many agree that it is the impermanence of the art that makes the festival so memorable and meaningful.

“I think the appeal to the community is getting out with your family and seeing beautiful art,” Peter Danciart, of the AIACC, said. “But, I think it’s also the temporal aspect. Beautiful art is made, and then it’s gone. It’s like a little snapshot of life.”

Jessica Peña once stole a piece of blue chalk from I Madonnari as a kid. You can try and get it back by contacting her at jpena@newtimesslo.com.