SLO's iconic Thursday night farmers' market won't be back anytime soon, but others in the county are still up and running

Every week F. McLintocks would spend roughly two days and use three full-time employees to prepare for San Luis Obispo's Thursday night farmers' market. The local saloon is famous for its showy barbecue booth, and at every Thursday market it serves up hot, juicy food to between 1,100 and 2,000 guests in just a few hours, work that requires around 12 employees and yields sales that equate to a typical full day of work. 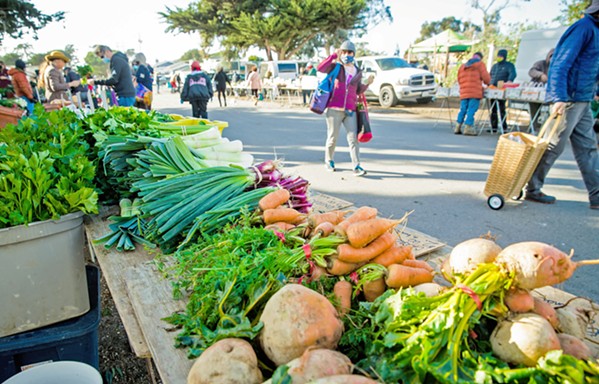 Those sales added up to more than just profits for F. McLintocks, its employees, and its meat and produce providers, according to owner Toney Breault. So when the Downtown SLO Farmers' Market closed indefinitely in March 2020, another unfortunate result of the COVID-19 pandemic, almost everyone in SLO felt the loss.

"The biggest impact is to the community," Breault told New Times, "and that trickles down."

The Downtown SLO Farmers' Market has been a San Luis Obispo staple since it first started in 1983. Breault said his father helped found the market as part of an effort to keep downtown businesses open past 5 p.m. once a week. The Thursday evening shopping and dining led to increased foot and car traffic, resulting in the city's decision to close some downtown roads on Thursdays, which made room for a market.

Before the Thursday night market's closure, anywhere between 5,000 and 14,000 Central Coast residents and tourists would head to Higuera Street every week, where the five blocks between Osos and Nipomo streets were usually bustling with scores of vendors serving up steaming hot barbecue, fresh-picked produce, and everything in between.

Most farmers' markets offer services similar to that of grocery stores and are allowed to operate amid the pandemic as essential businesses. But night markets like downtown SLO's—which often include live entertainment, hot food, and informational booths—are categorized as special events or street fairs.

So while it's business as usual for the many daytime farmers' markets throughout SLO County, it's been around 10 months since SLO saw its last Thursday night market on March 6, 2020.

When the Downtown SLO Association first decided to cancel the March 12 market, CEO Bettina Swigger said she assumed it would be operational again by April.

"We can all kind of chuckle about that now," Swigger said with a laugh. "The naivete of the early pandemic."

When April didn't pan out, Swigger said she still had hope for the next month, and then the next. Her team developed a handful of phased reopening plans for the market in 2020, none of which came to fruition.

Swigger is more cautious now, and more blunt. She doesn't know when the Thursday night market will be up and running again, but it won't be until at least spring of 2021. The cold weather, short days, and lack of produce at local farms in winter always result in lower attendance at the market, and Swigger said she wants to come back with a bang.

"We're hoping we can get to a point where there is less risk of disease transmission," she said, "and there's better weather and there's more produce availability."

But the extensive closure hasn't been without repercussions, even for the Downtown SLO Association itself.

The Thursday night market's impacts on the community are multifaceted. It drives heavy foot traffic downtown, leading to profits for both market vendors and nearby brick-and-mortar stores. Downtown SLO charges vendors anywhere between $40 and $300 to rent booths, and the association uses that revenue to operate the market and sustain its overall mission of providing support services to businesses downtown.

Without the Thursday farmers' market, Swigger said the Downtown SLO Association is about $200,000 short on funds. COVID-19 also took out the association's other cash generators—event sponsorships and Concerts in the Park—which resulted in the dismissal of about half of the association's employees.

In the meantime, Swigger said she's looking forward to redesigning the market with the new outdoor dining parklets in mind. It's exciting to think about how those seating areas could be included in the overall experience of SLO's favorite weeknight event, she said, and she can't wait to get the market moving again.

"It's part of our identity as a community," Swigger said. "So when we do bring the market back, we want to do it right to honor that legacy."

Produce vendors, who typically sell at multiple markets a week, have made it through the ongoing closure of the Thursday market relatively unscathed.

The SLO County Farmers' Market Association operates four weekly markets—not including the produce side of the Thursday night market—in Arroyo Grande, San Luis Obispo, and Morro Bay, and several others can be found across the county.

Those markets are all still operational, according to Farmers' Market Association Executive Director Peter Jankay, but with a few tweaks in place for safety. Masks are required, physical distancing is enforced, and Jankay said tastings and lingering are prohibited. So are informational magazines and brochures that customers might touch and then return to a booth.

So far, sales at the day markets are on par with pre-coronavirus times. According to a sales report provided to New Times, the Farmers' Market Association's four markets actually brought in slightly more revenue in the third quarter (July, August, and September) of 2020 compared to the same time in 2019. The Saturday market in Arroyo Grande saw a particularly large boost, jumping by more than 50 percent in the third quarter of 2020 compared to the same time the year before.

Vendors are, of course, missing out on the profits that would normally be made at the Downtown SLO Farmers' Market. But while that event brings in big crowds, Jankay said that doesn't necessarily translate into big money. SLO's Saturday morning market has regularly generated roughly twice the revenue produced by the Thursday night market for years, Jankay said. While the Saturday morning market brought in $371,359 in the third quarter of 2019, according to the sales report, the Thursday market generated $154,662.

The Downtown SLO Farmers' Market offers an entertaining experience, but the Saturday market offers something closer to grocery shopping.

"There're a lot of people who come in because they want the fresh fruit and vegetables," Jankay said, "and where they get them is the farmers' market."

SLO County farmer Jeff Nielsen said that although he hasn't noticed any major shifts in sales, he has seen some changes among his usual customer base. Nielsen manages and sells at a number of the county's farmers' markets, including in Cambria, Morro Bay, and at Farm Supply in San Luis Obispo, and he said it's been an "interesting" year attempting to enforce safety regulations and to please customers and vendors on both sides of the aisle.

He's lost loyal customers of decades who say they don't feel safe shopping at the markets, and he's dealt with others who refuse to wear masks and follow other required safety measures. At the same time, Nielsen said he's also gained some customers, those who want a safer alternative to shopping in grocery stores, or those who used to attend the Thursday night market in SLO before it closed.

Nielsen said he's looking forward to a time when things are normal again, but in the meantime, "the food continues to grow and people need to eat." Δ