SLO's Women's March on Jan. 21 to be followed by music in Mitchell Park and the Fremont Theater

Barring the world bursting into flames upon Cheeto Mussolini, uh, I mean President-elect Donald J. Trump's inauguration as our 45th president, life will go on come Saturday, Jan. 21, and if it does, you can join a whole bunch of folks as they march in solidarity with the Women's March on Washington happening at the same day in our nation's capital (learn more about our local walk and register to join in at womensmarchslo.com). 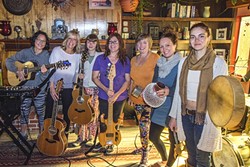 If you're wondering what this has to do with music, I'll tell you. After the march, which starts with a 10 a.m. rally in SLO's Mitchell Park before embarking on the 1-mile march with a police escort around 10:45, marchers return to Mitchell Park around noon for food trucks from Cubanissimo, Javed Kabab Paradise, and SLO Mama Sweet Frozen Treats, as well as entertainment from Central Coast West African Rhythm and Dance, Samba Loca, Inga Swearingen, Melody Klemin, the Vocal Arts Trio, and Amalia and Rio Fleming. All for free!

That event ends at 2 p.m., but that's when a female-centric concert by the women of United We Rise: A Concert for Change starts at Fremont Theater to keep the positive vibes going (2 p.m.; all ages; $10 tickets at Boo Boo's and ticketfly.com).

"Because there are more than 2,000 people coming to the march, we think it's possible we will fill out the place," said United We Rise publicist and New Times food writer Hayley Thomas Cain. "There are many, many women involved—it's a collaborative effort where women are working together to play songs, so no one band or musician is really featured—it's a giant jam sesh!" 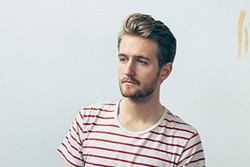 Join the fun as a group of passionate SLO County female musicians, vocalists, poets, and artists raise their voices in support of human rights, female empowerment, and unity. And join the march too, but keep in mind it's not a protest march but a march celebrating solidarity, inclusion, and protection of women's rights, safety, and health. Organizers expect more than 5,000 attendees, so be patient and embrace positivity and non-violence!

This grassroots concert at Fremont Theater is presented by Good Medicine Presents and Numbskull Productions and is a volunteer effort.

"Our intention for the show is women rising together to declare that our future will not be dictated by fear, lies, and hate. We stand loudly and clearly for love, community, collaboration, and human rights," concert organizer Shawna Marie noted.

Also courtesy of Good Medicine Presents and Numbskull comes Jesse Cook on Thursday, Jan. 19, at Fremont Theater (7 p.m.; all ages; $30 to $40 at ticketfly.com or Boo Boo Records). This world music master mixes sounds from around the globe.

Cross Atlantic plays Tooth & Nail Winery on Friday, Jan. 20 (6 p.m.; all ages; free). Made up of Missouri native and singer-songwriter Karli Chayne and Englishman James Sinclair Stott, the two met in a Nashville coffee shop and decided to sit together after discovering their shared music dreams, eventually mixing "his somewhat eclectic upbringing on a diet of classic English rock and film soundtracks, and Karli's country roots."

Chase McBride got his musical start on the Central Coast. His song "1937" was an award-winner way back in 2009 during the very first New Times Music Awards. He's since left SLO County, eventually relocating to the Bay Area. 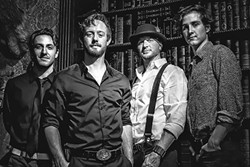 "I've been busy! I live in San Francisco now after a stint on the East Coast for graduate school," McBride explained via email. "I work as a brand strategist at OpenTable and I'm focusing on music too. It's crazy but I'm enjoying the hustle. I signed a publishing deal recently, so music is becoming a more serious endeavor for me. I'm excited about that."

"I'm beyond excited to announce that after a year of hard work, I'll be releasing my new full-length album Cold Water," McBride revealed. "It's my first show in SLO in three years."

On his third full-length album, McBride continues his foray into melancholic folk filled with confessional lyrics delivered with his tender voice. The lead track, "Control" has a similar vibe to Paul Simon's "Diamonds on the Soles of Her Shoes."

Some of the album's eight tracks are in the vein of Jack Johnson or Ben Harper. 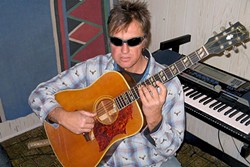 He also filmed a video for the album's first single "On the Other Side."

"I'm thrilled," he said. "The single is doing very well online; I hit the main page of EarMilk."

Cold Water is an immediately engaging and approachable record, the kind of CD you can put on repeat. It will also be released on vinyl. Hipsters unite! 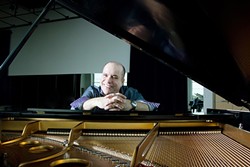 Kingsborough brings their old-school blues and roots rock sounds to Frog and Peach on Thursday, Jan. 19 (10 p.m.; 21-and-older; free). Expect blue-collar rock, the kind BAM magazine described as "rocking it like the big boys used to ... in the same way that Springsteen has always done."

The SLO Jazz Federation returns with the 2017 annual Marilyn Greenberg Concert, this time featuring the Latin jazz of Oscar Hernandez and Alma Libre Quintet on Saturday, Jan. 21, at Unity Concert Hall (7:30 p.m.; all ages; $25 general admission, $20 for Jazz Fed members, and $15 for students available at Boo Boo Records or brownpapertickets.com). Three-time Grammy Award winner Hernandez is a well-regarded pianist, arranger, and composer for the Spanish Harlem Orchestra as well as serving as music director for Paul Simon, Gloria Estefan, and many others. His band members have played with Freddie Hubbard, Mongo Santamaria, Carlos Santana, Tito Puente, and Arturo Sandoval. 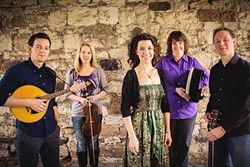 SLOfolks will host Irish music super group Runa for two shows this week: See them Saturday, Jan. 21 (7:30 p.m.; all ages; $20 at 238-0725), at Castoro Cellars; or Sunday, Jan. 22 (7 p.m.; all ages; $20 at 772-2880), at Coalesce Bookstore. According to press materials, the band "has been enchanting audiences by pushing the boundaries of Irish folk music into the Americana and roots music formats since their formation in 2008." Their group features musicians from Ireland and the U.S.

Reggae act Rise Up plays Frog and Peach on Sunday, Jan. 22 (10 p.m.; 21-and-older; free). According to the band, they mix "a smoky blend of roots reggae with California attitude for a style that falls closer to Bob Marley than Sublime," with music that features "infectious riddims, strong messages of positivity and consciousness, catchy groves, and big vibes." 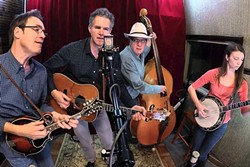 Americana pickers Chris Jones and the Night Drivers return to The Last Stage West BBQ for a buffet dinner and concert on Wednesday, Jan. 25 (6 p.m.; all ages; $45 presale at 792-0505 or 461-1393; or $55 at the door). "Founded by guitarist Chris Jones in 1995, the Night Drivers features four distinct personalities who bring a multitude of talents to each performance: Chris Jones, a two-time IBMA Broadcaster of the Year who hosts Sirius XM's Bluegrass Junction, bassist Jon Weisberger, who co-hosts Del McCoury's Sirius XM show, Mark Stoffel on mandolin, and the group's newest member, Gina Clowes, on banjo," their band bio reads.