The rain is coming down fast and slick, but it’s warm, dry, and cozy inside the San Luis Obispo Guild Hall. The air is thick with the smell of ginger and jujube tea, dark chocolate peanut butter balls, and spicy jalapeños. Karli and Curtis Twisselman stand in the center of the room, holding mason jars full of their flavorful handmade salsas. 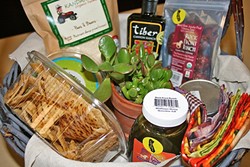 The contents of the Twisselmans’ jars—“mild: family style,” “medium: the original,” and “spicy: SLO burn”—offer up a bright red reminder of why this diverse group has assembled on a drizzly weeknight.

Instead of sipping tea by the fire, they are here, in force: Olive farmers and retired glass blowers Will Carlton and Chris Anderson of Tiber Canyon Olive Oil (their 50-acre ranch is located about 8 miles south of downtown); Jacob Pritzlaff and friends over at Whalebird Kombucha, brewed in SLO and distributed to local restaurants and grocery stores; and folks from Kacey Cakes, purveyors of all-natural deserts and seasonally driven delicacies.

I saw students from Cal Poly’s Real Food Cooperative as well as partners from the SLO Natural Foods Cooperative; interested residents willing to listen and learn; and local farmer Larry Kandarian, whose Los Osos Farm is home to an overwhelming array of gourmet pollens, beans, seeds, and ancient grains.

Young and old, SLO native or transplant, all of these people showed up to support Slow Money SLO’s mission: to promote the making, growing, and selling of local food.

If only Karli’s great-grandmother could see her handiwork now.

“My great-grandma created the recipe. She also had a restaurant in SLO called Nana’s Place, which operated from 1965 to 1983,” she said, backdropped by a projector showing a grinning family portrait. This statement is met with a healthy round of applause (as it turns out, a lot of people enjoyed her great-grandma’s grub).

It’s a touching moment, sandwiched between helpful advice on how to get products into locally owned and chain stores; what it takes to use fresh, local produce; how to utilize a commercial kitchen; and wholesale vs. retail tips.

It’s not the kind of warmth and recognition you’d expect at a standard “networking” meeting.

Maybe that’s because SLO Money Slow is not your average networking mixer. These gatherings—the next of which is slated for May 2 at Oak Creek Commons in Paso Robles—are part community hangout, part food-sampling party, and part dating service for growers, farmers, purveyors, restaurants, and lenders.

The umbrella 501(c)3 nonprofit organization Slow Money was originally formed in Boulder, Colo., and founded on the goal of “bringing money back down to earth.” Through their national gatherings, regional events, and local activities, more than $40 million has been invested into more than 400 small food enterprises around the United States. Twenty-five local networks and 13 investment clubs have formed. More than 30,000 people have signed the Slow Money principles (which you can see in detail on its website).

According to the nonprofit, Slow Money events have attracted thousands of people from 46 states and seven countries and Slow Money investing has begun in Nova Scotia, Switzerland, France, and Belgium.

So, what does this all mean for a family salsa business in Paso Robles? Well, for one: Slow Money SLO was recently able to vouch for Best Ever Salsa Company in its attempt to secure a Kiva loan. This is a big deal for a little guy. See, Slow Money SLO is a trustee for the Bay Area-based lending site, which acts a little like Kickstarer.

“We aren’t responsible for a guarantee for the loan, but we are someone in the community that can say, ‘We like these guys. You should support them,’” said Jeff Wade, network founder and leader of Slow Money SLO. “The first dozen or so lenders—which can give as little as $25—must come from local sources; friends, family, other local businesses. Once Best Ever Salsa gets that funding within a certain period of time, the campaign is then opened up, literally, to the rest of the world.”

Farmers stand to gain up to $10,000; The Twisselmans can expect a $5,000 loan for their value-added food product (that is, if they complete a successful campaign). The terms are sensible (two-year loan with zero interest, paid directly to PayPal each month) and offer a boon for small growers and makers looking for a viable way to get to that next level of growth.

“We’re about 80 percent funded with 100 investors; it’s going great,” Karli said. “It’s really fun interacting with the investors, and I love the fact that, in order to sign up, you have to invest in someone else’s project. This made us really feel like part of the process and got us involved in the community. It makes you want to turn around and support someone else.”

Note: Plenty of Slow Money SLO members not only seek support, but give financial support to other ventures. With the Kiva loan, the Twisselmans plan to trademark their brand and recipe, incorporate their business, and streamline their label and bottling process.

Although the idea of finding sensible funding does attract Slow Money SLO members, the group is not funding focused.

“These are meetings that really help our members get to know people in the local food system. Some may need lending down the road, but the point is to get people introduced and to get to know each other,” Wade said.

There’s also the mentoring, the education, and—perhaps the best part—the chance for farmers or small food businesses—like Best Ever Salsa Company—to connect with each other and share valuable insider knowledge. When small food ventures work together, they stand to raise all boats, not just their own.

Alisha Taff represents a good example of this. The Santa Maria-area jujube farmer and beekeeper at Rock Front Ranch also presented her goods during the meeting. Before the Twisselmans’ presentation, the farmer told me that although she knew that fellow Slow Money SLO member and farmer Larry Kandarian had to get up early the next morning to attend a farmers’ market in Southern California, he was adamant about showing up and supporting her venture. This provides a huge boost of confidence and camaraderie for anyone tackling the uphill climb of growing, marketing, and selling their own food.

There are always a series of trials: a steep curve of regulations, health department filings, learning by making mistakes, and licensing.

Now, Best Ever Salsa Company regulars stop by the Saturday farmers’ market in Paso Robles, local Food 4 Less stores, or DePalo & Sons in Pismo Beach to get their fix of the fresh, chunky snack. Still, there’s more to this business than simply making salsa and bottling it by hand (which the couple does, with some help from their three kids).

“Our children are our taste testers, but they also help in the booth, and that’s been fun—teaching them entrepreneurship. Our mission of starting this was to teach the kids how to start their own business,” Karli said.

For Wade, this deeper level of meaning provides ample motivation for the cause. How will the next generation eat and how will it affect our communities and our earth?

I’d say the answer to this question truly depends on the actions that happen now and how we, as consumers, choose to use our hard-earned dollar. SLO may be known for its amazing climate and bounty of fresh, local food, but it’s also known for its community spirit and willingness to reach out, neighbor to neighbor. Will you spend this week’s grocery budget at a farm stand or a chain? For more and more SLOcals, the answer is clear.

“We are a great county for this kind of movement. In SLO County, we’re food oriented and interested in investing in small, community businesses,” Wade said. “People from around the country call me up and ask, ‘How did you do what you’re doing in SLO?’ I always have to tell them it’s thanks to the people who live right here.”

Hayley Thomas Cain is spending her dollars at the farmers’ market. She can be reached at hthomas@newtimesslo.com.