Diane Matzner has been a small business retail owner and operator for three decades. She spent most of that time, 22 years, operating three retail storefronts in Palm Springs on Palm Canyon Drive. Matzner grew up near the beach, so being in Palm Springs was always very different for her.

"I was literally a fish out of water, and I was always thinking 'I can't wait to get back to the beach,'" Matzner said. 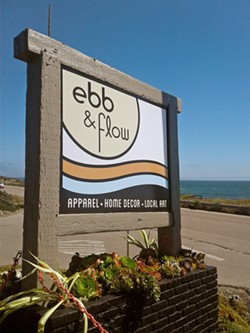 After 27 years inland, she made her way back to a community by the ocean—she landed in Cambria. Matzner didn't really plan on or think about opening another store. She felt like she was on a sabbatical from the work she had done for a large portion of her life.

"I popped into The Garden Shed one day with a cup of coffee from [Lily's Coffee House]. I went to the back and met Nick Wilkinson from Grow, and I just thought, 'Man, this is a really cool vibe back here," she said.

There was a small shed for lease in the courtyard of The Garden Shed and it's where Matzner got back in the retail business again. Her first shop in Cambria is called Ocean Heir, where you can find a bounty of clothing, jewelry, letterpress greeting cards, books, home goods, and gifts.

She was on a walk along Moonstone Drive when she saw a for rent sign in one of the storefronts. After running Ocean Heir for seven years, Matzner is expanding with the recent opening of Ebb & Flow on Moonstone Drive.

The building has large windows that look out to Moonstone Beach, and Matzner said she felt it was a beautiful location for another addition to her business.

"The location is just epic, and that's what really got me," she said. "I keep joking to everyone that I could have nothing in here and just charge an entry fee to just come inside, sit down, and stare down at the ocean."

Ebb & Flow will have a different vibe than Ocean Heir. Matzner said the clothes and items in her store will have a more natural look in order to blend in with the ocean just steps away from the shop's front door.

The location has a little history that Matzer is holding on to. It used to be a live-in gallery for an artist. When Matzner told her friends in the community that she was expanding into another location on Moonstone Drive, they already knew where because of the long-time local artist. So Matzner is leaving one wall in the shop as a gallery as a nod to the artist. She's planning to have local artists display their creations on the wall for two to three months at a time.

"I hope it will be well received by the community, because I'm definitely making an effort to include the community in this. I want it to be a local place first," she said.

To learn more about Ebb & Flow, visit ebbandflowoceanfront.com. Matzner said the shop will be open seven days a week, from 10 a.m. to 5 p.m.

This year, Elks Lodge members throughout California and Hawaii have contributed more than $3.9 million to treat children with disabilities. Elks Lodge No. 322 (San Luis Obispo) members raised $22,600 to contribute to the fundraising effort. Since 1950, 84,000 members throughout the state and Hawaii have given more than $120.5 million to the California-Hawaii Elks Major Project Inc., which administers the nonprofit charitable corporation. All the funds are devoted solely to providing vision screening and therapy treatment to children with a broad range of disabilities. To learn more about the Benevolent and Protective Order of Elks of the U.S. or to find out where a local lodge is near you, visit elks.org. Δ