Small parts in a grand machine

Diana Stanton—choreographer, Cal Poly dance teacher, and director of Orchesis Dance Company—wanted to know. Her students, many of them aspiring mathematicians, engineers, scientists, and businesswomen, were quick with the answer.

“I work at a polytechnic,” Stanton explained at a recent rehearsal. “They said, ‘Oh, it’s the rotational energy that goes into forward motion.’ I thought, ‘That’s movement. That’s dance.’” 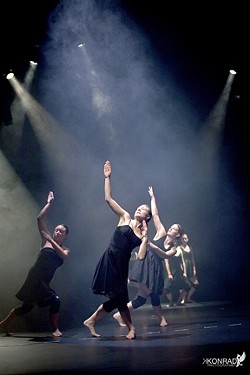 “Torque” is also the name of the opening piece of Immersion, the 42nd annual Orchesis Dance concert. Choreographed by Stanton, the work seems to imagine dancers as conduits of energy, sometimes even as energy itself. One moment they move with the calculated, angular fashion of small parts in a grand machine, the function of which their passive faces never question. Their arms are turbines, slicing the air. The next moment they are near-fluid organisms, pulled across the stage like jellyfish washing ashore with the tide—helpless, but devoid of expression. Accompanied by haunting, siren-like vocals and the deep, rhythmic boing-ing of a jaw harp, “Torque” conjures a landscape that’s alternatively ancient and industrial.

Following “Torque” is Dr. Moon Ja Minn Suhr’s “Whale Song V,” a piece choreographed to a recording of the eerie, echoing song of humpback whales, accompanied by the soothing narration of biologist Roger Payne, whose observations glide effortlessly from technical to philosophical.

But if you’re trying to make any connection between these pieces and the show’s title, stop. Despite the company’s mysterious, one-word titles—Shift, Continuum, Impact—there’s typically no overriding theme to an Orchesis concert. What can be counted on, however, is the show’s persistent variety, embracing everything from breakdance to tap to classical ballet, and emphasis on original, often experimental ideas from student, faculty, and guest choreographers. And for a university with no dance major, the annual show is an impressive feat indeed. 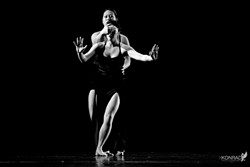 Danielle Dahlerbruch—a business major with an accounting concentration—choreographed “Poursuivre,” a work she says explores “those moments in life of connection, and people who come in and out of your life.”

Biology major Misty Moyle’s “1 Corinthians 13:4-13,” set to the music of Mumford and Sons and Hans Christian, is about “a lesbian couple, and the relationship between the LGBT community, society, and religion,” she said.

“I’m kind of going for the irony thing,” she added of the piece’s title.

Guest choreographer Holly Johnson, director of the San Francisco- and Los Angeles-based dance company Ledges and Bones, choreographed the highly athletic “The Fall We Know,” which could read as an intriguing study in inter-reliance—perhaps even codependence. Dancers seem to be constantly trying to assess where they are in space by feeling about blindly for the others. They form partners and momentarily move in sync, one using the other’s body like a trapeze. But when one partner weighs too heavily, the other lets him or her slide down, bit by bit, onto the floor. When, at the end, they all slowly collapse onto the stage, they disappear, through lighting trickery, into total blackness. Stanton characterized the mood of the piece as “surrendering to the unknown.”

And while much of Immersion is modern and experimental, the concert’s finale taps into a virtually universal favorite: The Beatles. “Our Plan,” performed by dancers dressed completely in white, is a sprawling piece by Mike Esperanza featuring “Imagine,” “Let it Be,” and “Yesterday” (music performed live by Monica Mills).

“You’re getting a whole bunch of shows in one,” Stanton claimed.

She’s not exaggerating. “Our Plan” is a surprisingly tender, honest, and perhaps conventional note on which to conclude. But having already embodied energy and surrendered to the unknown, where else are we to go?