Binta Diakite is a sweet, optimistic woman who speaks just above a whisper. When she talks about Walk for Humanity the nonprofit that she and three other Cuesta students recently set up her words become pointed and forceful. She's passionate about this. 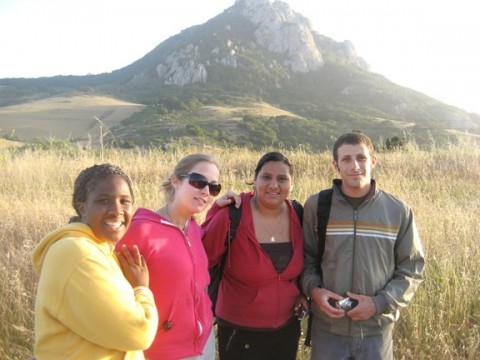 # "I was feeling overwhelmed," Diakite said in response to global genocide, hunger, and disease. "I wanted to do something, do and say something that made me feel connected to the whole situation connected to humans."

The group of four came together organically to form Walk for Humanity. Diakite met Amanda Dyer in a kickboxing class when they first discussed forming a group to raise money for international charities. Mayra Valencia and Diakite met on the bus, and Michael Mazzella met Diakite on a campus bench. The group decided to raise money for Doctors Without Borders, a group that sends volunteer physicians into impoverished areas and places in crisis around the world, such as post-Katrina Louisiana.

To bring attention to their cause and the large-scale suffering they seek to ease, the group is setting out on June 7 for a journey from the SLO mission to Santa Barbara's mission. Covering 120 miles on foot should take five days.

This is the first event the group has organized. They have modest goals so far any amount that they can round up to donate will make the trip successful, and any dialogue they create helps the cause.

"I think what's important now is to have social movements," Diakite said. "We have so many political movements, and I see a growing gap between the far left and the far right. We need come together as a culture and as humans and do something. We need to have dialogue."

Walk for Humanity chose Doctors Without Borders specifically because it has no political bonds and is extremely reputable.

horrendous ways. I know it might sound sort of '60s, or almost hippie, but we've got to come together as human beings."

The group is already planning a second walk for this year that will benefit a different charity, one yet to be decided. They also hope to round up more members of the community for a walk around the city while they walk down the coast. Walk for Humanity has set up an account at Bank of America into which business or individuals can contribute funds. They're also seeking volunteers to house them along the way. To learn more about the group, visit them along the journey at www.myspace.com/walkforhumanity.