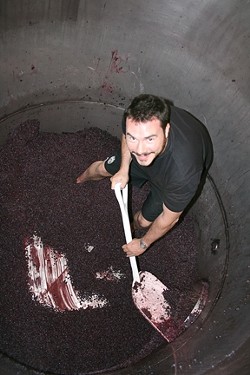 “America claims to be proud of being a classless society,” London author Nick Leonard writes in his book Roller Skaters and Wine Makers. “However, I’ve found at least one class that stands out from the rest.”

Leonard is referring, here, to trailer trash, the “whipping boy for the rest of the nation.”

Of course, if you happen to be a British writer and are holidaying on the Central Coast in an Airstream—which you refer to genteelly as a “caravan”—Americans may spare you this immediate vilification. It’s a fine line, like the one between camping and homelessness. But it’s there all the same, if Leonard’s “22 tales from a California caravan” are any indicator.

Leonard came to California intending to write a novel, he said, having been too distracted to write it in the U.K. This self-assignment was soon hijacked, however, by the parade of stranger-than-fiction phenomena that is San Luis Obispo to an outsider. The resulting Roller Skaters, conveniently packaged into 22 firsthand accounts of SLO’s quirks and foibles, is probably funnier anyway.

The regulars (Farmer’s Market, Paso Robles’ wine industry, Bubblegum Alley) are duly addressed, but so are gun ownership, trainspotting, kissing etiquette, local cooperative the Establishment, Bike Happening, and the roller derby. Leonard has an eye and an ear for odd detail. Coming back to the trailer topic, Leonard notes, “in America a camper is called an ‘RV’ (short for Recreational Vee-Hickle, and that pronunciation is essential).”

In a funky little post-modern twist, Leonard became the main character in the novel he set out to write. His unborn novel, he said in a phone interview, centered on “one of those people who’s really hungry for experience … he’s passionately interested in anything. The kind of guy that, you know, you go to a bar with him, send him off to buy a drink, and half an hour later you realize he hasn’t come back, but it’s because he’s met some bloke in the queue who’s telling him about his life as a cobbler or something, and he’s pestering him with questions, already fascinated.”

The best way to “get under the skin” of his spontaneous main character, the author decided, was by saying yes to everything. Did he want to go on a moonlight bike ride? All right. Would he like to jump barefoot into a giant barrel of grapes and stomp around for a bit? Of course. Embrace nudity and supreme relaxation at Big Sur’s Esalen? Um … sure. Thus the fodder for Roller Skaters accumulated.

It makes sense, then, that Leonard’s writing is at its best when spontaneous rather than reflective, as in “Two Wheels Good,” a chapter on bike shenanigans; “The Sticky Side of SLO,” a grossed-out assessment of Bubblegum Alley; or in describing his commando experience at Esalen in “English and Exposed.”

Any visitors who spend enough time in a foreign country end up celebrating a holiday that’s not their own, or seeing one of their own holidays go uncelebrated. Leonard comments on the oddity of Bike Happening falling on Guy Fawkes’ Night: “The fifth of November’s not really for riding bikes. It’s for burning bunk beds and eyebrows … and dead Catholics.” A deserted downtown San Luis Obispo on Thanksgiving, just another square on a Brit’s calendar, provides the backdrop for a pensive bike ride chronicled in the chapter “Thankful.”

Leonard can be really cheesy, and some closing paragraphs get rather grabby in their attempts to perfectly tie everything together. But most cheesiness is intentional. The book’s introduction is a kitsch-tastic tableau of sunny, beachy, recycled L.A. clichés, the ones that cause any Californian who has traveled abroad to wince. But whatever.  Just, like, flip your bleached blonde hair, roll your eyes, and keep reading, dude. The real California lifestyle is what this book is about.

The author’s observations, intended mostly for laughs, are lightly peppered with insight into local culture. At his host’s decision to escape to a relaxation resort to get away from the (as he sees it) already incredibly relaxed lifestyle of a town called SLO, Leonard writes, “The mind boggles.” Californians are fiercely devoted to their hobbies, whether it’s biking, rock-climbing, or roller-skating. Relaxation, muses Leonard, can’t be any different: “Only Californians know what it is to work hard at your leisure.”

It takes an outsider to accurately point out the regional oddities of any place, and a witty one to make locals laugh at themselves so hard they forget to get offended. Leonard’s slim paperback fits neatly into the latter category.