If you do a frequency search for the word “feminist” on the New York Times, you’ll see the graph spike for the year 2014. Compared to last year, use of the word has more than doubled, fully vindicating what many are calling a broad resurgence of the term, and its message of gender equality, across the globe. Only a few weeks ago, Emma Watson stood in front of the United Nations and proudly declared herself a “feminist.” In August, the term towered behind Beyoncé on stage at the MTV Video Music Awards. And, in May, SLO’s own Lena Rushing curated “Feminist: Look It Up,” an exhibit at Linnaea’s Café dedicated to the power and diversity of women. Feminism is on the rise, and Smart Studio in SLO continues this renaissance with its new exhibit, Girl: A Feminist Art Show. 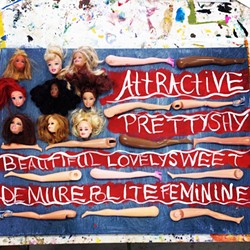 Terri Kurczewski, who runs Smart Studio, was there one evening, enjoying the simple pleasures of massacring a Barbie, when an idea struck her. Dismembering those plastic idols, she couldn’t help but think about the sometimes-problematic subject of female representation. After all, these were Barbies—the symbol of feminine ideals for those who have ambitions to be a buxom, mute combination lifeguard/aerobics instructor/nurse. These dolls and the ideas of womanhood they embody posed some serious questions about gender, identity, creative depiction, and what feminism means in contemporary society—questions that Kurczewski had already been considering as a woman, a mother, and an artist.

“I’m raising a daughter, so I’ve been really thoughtful about how the notion of feminism has changed from when I was young to something really nebulous and different,” she explained over the phone. “And, that’s especially true in this community. I’m from San Diego and Oakland, and there seems to be more of a movement, but I think here, it’s not that prevalent.”

The Barbie mutation put everything into perspective. What if there could be a show about these very issues—about womanhood, art, and community? So, Kurczewski gathered the Smart Studio artists and some friends. They were on board, and the exhibit formed into a broad and varied collection of work from local female artists. For Smart, a studio that typically deals in crafts, kids classes, and green, DIY projects, this provocative display will be the first of its kind.

“I really thought it was about time that my studio put a positive spin on social change,” Kurczewski said. “People forget the sole purpose of art is to inspire and make people think. I’m really thinking about this theme, and so are my friends and the studio artists, so we put it together to be a showcase for the community.”

The exhibit will feature Kurczewski’s own pieces, some of which contain the aforementioned Barbie bits, and the diverse pieces of around 10 other artists who differ in age, preferred medium, and perspective concerning the central theme of womanhood. There will be illustrations, mixed media, and sculpture—some of which warrant the 18-and-older warning for sexual explicitness. But, there will also be the more family-friendly fare of artists like Therese Bailey, who crafts handmade books about beauty and femininity.

“What I like about it is we’re a range of artists, from mid-30s to mid-50s, so the variation of what feminism means is so different,” Kurczewski said. “All of the pieces really reflect not only what it means to have gender equality, but what it means to be a woman. I really believe that women are allowed to have it all. It’s all about having choices the way that men do, and I wish that for all people.”

What it means to be a woman, in this world and in this community, is what Kurczewski wants people—women, men, and possibly even children—to ponder. The art is not about business, status, or titillation, but about the pure act of inciting discourse in positive and constructive ways within the area. It is art with a conscience, a perspective, and the potential for change.

“This is an opportunity to bring people together in a way that is not currently happening,” Kurczewski said. “It’s to discuss the relation of art to our lives, so that we’re talking about it. It’s about openness and opportunity, a chance for us to explore all sides, to really look at art, and say, ‘Wow, how does this affect me and the way I see the world? The way others see the world?’ These are valuable conversations.”

Jessica Peña may or may not have ripped the hair off her Little Mermaid Barbie doll as a child. Send her a replacement at jpena@newtimesslo.com.