Inside a small kiosk planted on the side of a bustling street in Grover Beach, a small Italian woman leans forward as she speaks.

“Sometimes things happen,” she says, with her hand already in the air as she snaps her fingers, “like that.” 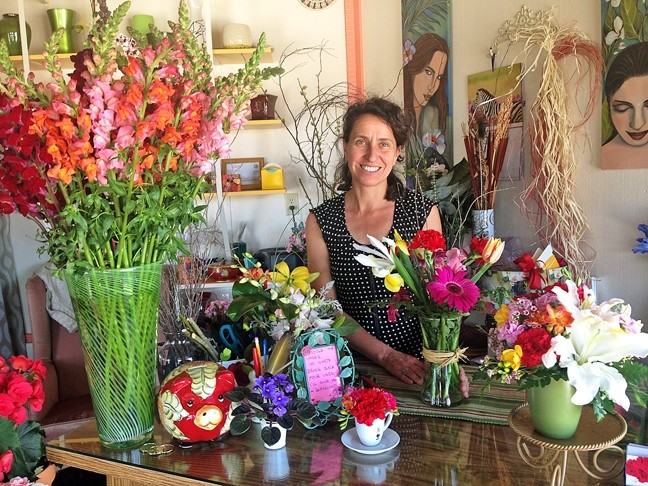 As she finishes her sentence, the wind whips through and slams the front door.

Giorgia Nicholas has always dreamed of running a flower shop—ever since she was a little girl growing up in Italy. That passion finally came to fruition on March 1 of this year. That’s Amore, or at least that’s the name of her new shop on West Grand Avenue.

On the counter, vibrant snapdragons stand at full attention. Most flowers are in full bloom and openly showing off their texture and color, but behind the glass door there’s one flower that’s not in its prime just yet. It’s an iris, and those are Nicholas’ favorite.

She moved to Grover Beach three years ago, leaving one coastal town for another. It was in her hometown of Trieste, Italy, where her love for flowers bloomed.

“I think flowers are talking about beauty and are talking to the soul of the people,” Nicholas says.

Her floral pursuits were put on hold because Nicholas worked behind the scenes for a theatre company for many years. The pay was good, but something was missing—she was a puzzle, yet to be completed.

“Maybe I’m losing pieces of other things in my life,” she says she thought at the time.

The flower-filled piece of her life is now set firmly into place, and she’s made the most out of the small space off Grand Avenue. An outside space, cozy enough for two, is decorated and has a bookcrossing—sort of a mini library—for guests to come and read as they please.

“We call this the serenity patio,” Nicholas says over the low buzz of street traffic.

She left a very similar life in Trieste. She had friends, family, and a flower shop of her own. Yet, she decided to start again in California. Why?

Many years ago, she met her future husband on a vacation in Wyoming, and their love grew. They were friends for a long time, always managing to keep in touch, and eventually their friendship turned into an engagement. Three years ago, they decided to get married and she moved out here to his hometown.

“I fell in love twice,” she says, “to my husband and to the place.”

Nicholas intends for her flower shop to be a welcoming spot for the community. With the bookcrossing and patio ready to use, she also intends to host small events.

Her shop creates a variety of arrangements for several occasions: weddings, prom, birthdays, sympathy, and funerals. Sympathy and funeral arrangements are her favorite ones to make.

“In some ways, it’s a goodbye to somebody, the flowers are saying something again,” she says.

It’s midday and the shop is quiet. Nicholas is making an arrangement for a bright lady, carefully selecting which flowers would compliment her client’s eyes.

When she finishes, she takes a step back.

“That’s the story,” she said