I walk into SLO Brew on Tuesday, March 27, about one verse into Todd Snider’s first song. He’s kicked off his show with “The Ballad of the Kingsmen,” and he’s talk-singing out to a throng of about 250 people, “Now, I don’t know the words to that song ‘Louie Louie,’ and I’m pretty sure the singer for the Kingsmen didn’t know ’em either. If he did know ’em he didn’t get ’em right on the record ’cause on the record they sound jumbled in his jaw. It says, ‘Me think of me girl oh so constantly. Ahmayaaah makaaaah aahh ooohoooh aaaaah.’ Well, that last part scared everybody from the PTA to the FBI.” 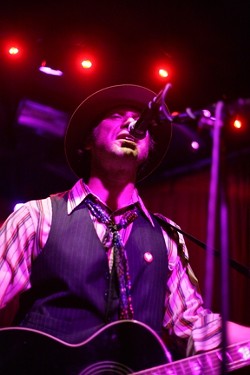 The crowd is going nuts! Everyone’s crammed to the front of the stage, singing along, smiles like melon slices filling the club. I grab a beer and see Pepper Daniels and Adam Montiel, DJs on The Krush 92.5FM, and we join Melanie and Derek Senn of the Wedding Industrial Complex and my paramour Anna Robertshaw in a booth and settle in to listen to Snider, whose voice sounds like a rusty chain being dragged behind a rustier bicycle, or maybe a tom cat trying to scratch through a screen door.

“No, he sounds like Tom Petty on three espressos,” says Melanie. “No clichés. Compelling. Doesn’t need a fucking band.”

“No, he sounds like blue cheese—distinct and bold,” says Pepper.

“No, he sounds like deep whiskey, shallow women, and the beautiful mess created in between the two,” says Anna.

“Todd Snider’s voice sounds like all the world’s hypocrisy and bullshit could be smelted down into a set of steely vocal cords that are left for dead in a scrap yard of all the world’s hypocrisy and bullshit where they oxidize and age, only to be rescued by a junkyard collector who rehabs them into fighting shape,” says Derek, which effectively ends our “Describe Todd Snider’s Voice” contest.

Todd’s song ends and he says to the crowd, “I’ve been driving around this country for 15 years, singing for anyone who’ll pay me, and I’ve also been known to share my opinions, not because they’re smart or because they’re right, but because they rhyme.”

Then he points out a little table with four or five cheap plastic trophies and says, “You’ll notice I brought my trophy collection with me, and you’ll notice I also brought a couple burnouts,” he continues, pointing to his band, bassist Eric McConnell and drummer Paul Griffith.

Then he launches into “Beer Run,” and the crowd goes apoplectic! I can’t believe he didn’t save it for his encore. Everybody’s singing along, and I head to the bar to grab another beer, and another gent and I get caught in a bottleneck of people, and I’m waving him ahead and he’s waving me ahead and then suddenly a woman in front of us crumples to the floor like she’s a 14-year-old seeing Elvis for the first time. Then someone says, “Another woman had to be carried out of here a few minutes ago,” and then I see Todd Newman, who runs the club, and I say, “I’ll have what she’s having,” as her friend guides her out the door and she fans her face with her hand. Good lord!

Then Snider’s telling the crowd a story about a girl he once dated.

“It’s tough to bring home a folk singer to meet your parents,” he says, and then I see Melanie rub her folk singer husband Derek’s head, which is pretty sweet, and I grab my camera and wade into the crowd.

The thing about a Todd Snider crowd is they’re so freakin’ happy that they just move out of the way, except for a woman who says, “You have to dance with me first,” which I sort of do, and then I take some photos and marvel at the fact that everyone seems to know all the words to every song.

And I look at Derek looking longingly at the empty stage, and Melanie says, “Derek would leave me for Todd Snider,” and Derek says, “Dude, he has a white Cadillac,” and I know Melanie’s right. She’s just so right.