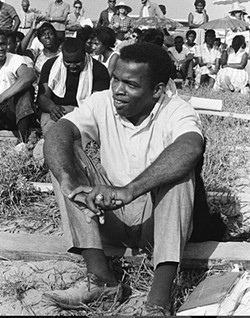 The San Luis Obispo Museum of Art (SLOMA), R.A.C.E. Matters SLO, and SLO Motion Film present SNCC, a film by Danny Lyon, on Saturday, April 24, at A Satellite of Love from 7 to 10 p.m. The screening will be preceded by a live Zoom Q-and-A with Lyon and Patrisse Cullors, executive director and co-founder of Black Lives Matter Global Network Foundation. The event is held in conjunction with Richard Fusillo's photograph exhibition, We All Bleed, currently hanging in the museum and available to view virtually on sloma.org.

The documentary film features legendary photographer and filmmaker Lyon's iconic photos of John Lewis and other Student Non-Violent Coordinating Committee (SNCC) activists in the 1960s. The images are remarkable—a time capsule of the past. Featuring archival interviews, including the last interview with Lewis, a powerful soundtrack, and the amazing and deeply moving story of the fight against racism—this is a must-see film.

Lyon's work is in the style of New Journalism, in which the photographer becomes intertwined with his documented subject, so it's also Lyon's story of his involvement with the civil rights movement and those he encountered and befriended along the way. Sadly, the fight continues. Tissues recommended. (74 min.) Δ