When California State Parks announced plans to temporarily close the Oceano Dunes to vehicles on March 26, the decision—an effort to reduce crowds at the park amid the coronavirus pandemic—was applauded by SLO County residents who saw it as a near once-in-a-lifetime opportunity.

For some, the closure is a convenient time to test the theory that dangerous sand emissions in the area are worsened by vehicle activity in the Oceano Dunes State Vehicular Recreation Area (SVRA). For others, like Los Osos resident Jeff Miller, it's a chance to give the endangered species that inhabit the dunes a break from the crowds.

As a senior conservation advocate at the Center for Biological Diversity and a longtime bird watcher, Miller is especially interested in snowy plovers and least terns. Both are endangered birds that commonly nest and breed in the dunes, and although the U.S. Fish and Wildlife Service and State Parks have been working together for decades to protect plover and tern breeding sites, the birds have struggled to recover. 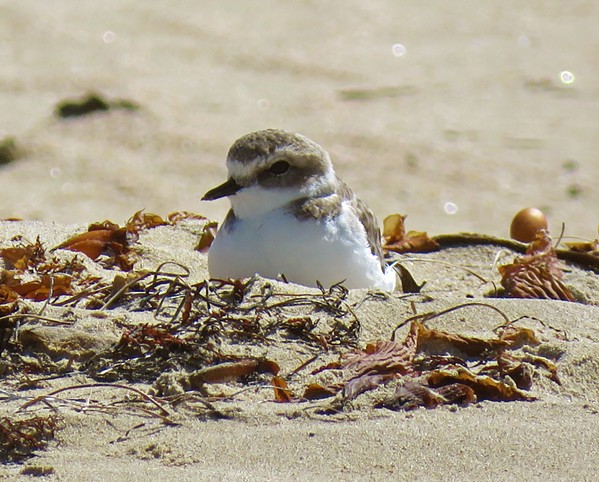 "Snowy plovers and least terns need to rebound," Miller said. "And we had some hope that with the closure of the off-road area due to COVID-19 that, finally, these endangered birds would be allowed to have a good year."

But now, with SLO County en route to an accelerated reopening, conservationists like Miller worry that any progress the birds made will be lost. Without vehicles and crowds, birds have been free to roam outside of their usual designated enclosures, and Miller said snowy plovers in particular have nested in open riding areas.

"We have a problem with State Parks trying to prevent plovers from basically having a good nesting season this year," Miller said.

In 2017, least terns had "a near complete breeding failure" in the dunes with only seven juveniles produced, according to a State Parks report published in November 2019. Things improved in following years, but juvenile production remained lower than the previous 13-year average of 47 juveniles a year.

Snowy plovers in the Oceano Dunes struggled in 2019, too. Of the 239 known nesting attempts, 71 failed. About 108 juveniles were produced in 2019, according to the report, for a successful fledgling rate of only about 27 percent, lower than the 49 percent success rate in 2018 and the previous 17-year average of 40 percent.

"Mostly that's due to high concentrations of predators," Miller said.

Birds in the dunes face a challenging set of circumstances, Miller said. Trash builds up in the park's dumpsters, according to Miller, attracting seagulls, ravens, skunks, and raccoons—predators—in higher than natural numbers. Noisy vehicles and crowds make it difficult for the birds to build nests wherever they'd like, and a few unfortunate birds get flattened on the beach each year.

But since the prohibition of vehicles in mid-March, plovers have been nesting increasingly outside their "seasonal exclosures," designated breeding areas that are off-limits to vehicles and visitors. As of May 27, State Parks had discovered 18 total snowy plover nests (and no least tern nests) in the open riding area and foredune closures, 15 of which were active. That's compared to the 20 active nests that were found inside seasonal exclosures.

Instead of deterring plovers from nesting in riding areas, Miller and other members of the Dunes Alliance, a coalition of environmental organizations on the Central Coast, want State Parks to keep the SVRA closed to vehicles until at least the end of the snowy plover breeding season in September.

But Jorge Moreno, a spokesperson for State Parks, said that isn't possible.

"During the COVID-19 park closures we have seen the robustness of wildlife resources at many of the park units ... with the absence of public access," Moreno wrote in an email to New Times. "While it would be most beneficial for the conservation of the wildlife resources at all of these park units to keep them closed to the public, it would not satisfy the obligation of California State Parks to provide appropriate public access."

Although Moreno said a reopening date hasn't been decided upon, he confirmed that State Parks biologists are monitoring plover and tern activity and working to deter nesting in open riding areas. Plovers first start building their nests by putting little scrapes in the ground. If those scrapes are found in open riding areas, Moreno said staff may scuff them out, but not if there are eggs present. Staff are also putting up stakes with streamers, which resemble avian predators to plovers, in some riding areas where scrapes have been found.

But Moreno said it's illegal to interfere with the active nests—those with eggs—of any migratory bird. Any active plover nests found in open riding areas of the Oceano Dunes are immediately protected with fencing, and streamers within a few hundred feet are removed.

The Oceano Dunes District retains a recovery permit from the U.S. Fish and Wildlife Service that allows certain activities near nests for conservation and management purposes, which U.S. Fish and Wildlife confirmed. When it's determined that vehicle access can be allowed again in the Oceano Dunes, Moreno said an operational plan protecting shorebirds will be implemented.

"The operational plan includes additional monitoring, enforcement, and public education about the changed conditions, including nests and chicks in areas that have traditionally been open to public activity," Moreno said. "These efforts will continue to allow the shorebird nesting populations and our human visitors to Pismo [State Beach] and Oceano Dunes SVRA to thrive." Δ